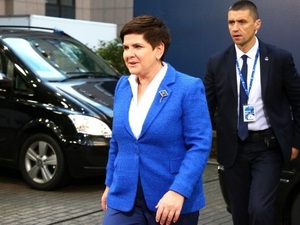 Polish Prime Minister Beata Szydlo on Thursday said her country would not follow Britain and leave the European Union, but criticized the European Commission for overstepping its brief.

"The vast majority of Poles are in favor of Poland's presence in the EU. There's no party in the Polish parliament that wants Poland to leave the EU," Szydlo told a foreign policy conference in Warsaw.

"Meanwhile, there have been attempts to convince the European public that Poland is anti-European or even that there's a threat of Polexit," she added.

"I want to say this loud and clear: no such thing will happen. Poland belongs to the EU and the EU belongs to Poland too."

Warsaw and Brussels have been increasingly at odds on a series of issues, including the right-wing Law and Justice (PiS) government's controversial court reforms.

The PiS government, which came to power in 2015, is also defying a European Court of Justice injunction to suspend logging in the Bialowieza Forest, Europe's last primeval woodland.