Villa Given 'Slim' Hope of Returning this Season 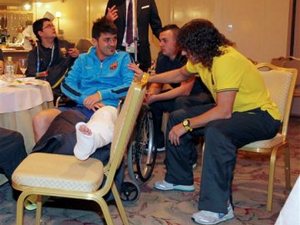 David Villa has only a slim chance of playing for Barcelona again this season and could also miss the 2012 European Championship after undergoing surgery on his broken leg on Monday.

One of the doctors who performed the operation said the 30-year-old Spain striker would be sidelined for four to five months.

"The chances (of him playing this season) are slim, but it cannot be ruled out," Dr. Ramon Cugat said. "The timetable of four to five months is tight, yet there is hope. He has his goal to reach.

"Tomorrow he will begin his recovery, beginning to move his ankle. In three days he will be on crutches, and in five weeks we will remove the screws."

Defending champion Spain will open its Euro 2012 campaign against Italy on June 10 and could be without its all-time leading scorer.

"We hope to have Villa back in time for the European Championship," Cugat said. "It will be cutting it close. I believe that (the recovery) will take four to five months, but we have to see how he evolves. I could make a mistake if I give an exact date."

Villa was hurt during Barcelona's semifinal win over Al Sadd at the Club World Cup on Thursday.

Dr. Ricard Pruna, who also participated in the surgery on Monday, said the injury was the result of a stress fracture in his left shin bone that reached its breaking point when Villa challenged for the ball.

"In September we found a light stress fracture in his tibia," said Pruna, who added that Villa decided to continue playing since the recovery time for preventative surgery was the same four-to-five month period in case of a break.