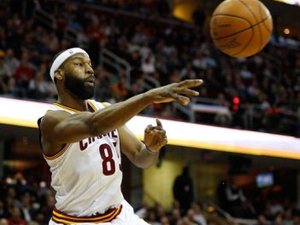 NBA free agent guard Baron Davis took phone calls from the Miami Heat and Los Angeles Lakers, but the offer he accepted on Monday came from the New York Knicks.

Davis, dropped by the Cleveland Cavaliers last week under a salary amnesty program in the new NBA collective bargaining agreement, signed with the Knicks for the veterans minimum salary of $1.4 million.

"Those teams did call and I have a great respect for both organizations, but for me it was just the opportunity to play in New York and to play on this team," Davis said.

"I always kind of rise to the occasion when I'm playing against the Knicks and playing in the Garden. It's just an unbelievable opportunity and I'm ready to accept the challenge."

Davis will still be paid the $28 million he is owed in the two remaining years of his contract, but the figure will not count against the Cavaliers' salary cap, making it easier to take the minimum and help New York cap issues.

A bigger priority, Davis said was the front-court lineup of Anthony and Stoudemire flanking Chandler.

"A big reason why I came here was because of the front line," Davis said. "You just think about two 20-plus scorers on your front line and then a guy like Tyson Chandler, who's a defensive stopper and a great defensive leader.

"For me it'll be great to get out on the floor and just play with guys at that talent level."

After struggling with rebuilding sides Cleveland and the Los Angeles Clippers last season, Davis is anxious to get on the court for the Knicks.

But he will have to wait. A herniated back disc is expected to sideline him for eight to 10 weeks.

"The first order of business is just get him healthy and make sure that when he is able to play, he's ready to go," Knicks coach Mike D'Antoni said. "Just adds another weapon to already a pretty good group."