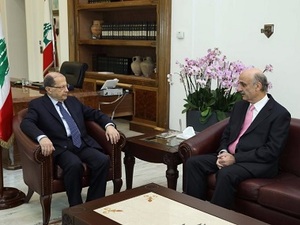 Lebanese Forces leader Samir Geagea announced Monday that the LF's three ministers will not resign from Prime Minister Saad Hariri's government, as he reiterated his call for Hizbullah's “withdrawal from the regional crises.”

“Some parties are trying to address the crisis in a shallow manner and this is wrong, seeing as we all support the settlement,” Geagea said after talks in Baabda with President Michel Aoun, referring to the 2016 settlement that led to Aoun's election and Hariri's designation as premier.

“There is a major crisis at the level of the Middle East and Lebanon's dissociation from conflicts should happen through actions and not words,” Geagea added, calling for Hizbullah's “withdrawal from the regional crises.”

“There should a real state and the issue of Hizbullah's arms should be addressed in terms of the military and security decisions, which should be limited to the state, and this is what I discussed with the president,” the LF leader went on to say.

Responding to a reporter's questions, Geagea underlined that the LF will not withdraw from the government in the current period and that all political parties are currently “reevaluating the settlement.”

“We will continue what we were doing inside the government,” the LF leader added.

He also said that “the Foreign Ministry should coordinate with the international community” regarding the issue of repatriating Syrian refugees to safe zones inside Syria.

Aoun kicked off Monday morning a series of bilateral consultations in Baabda with the country's political parties, a few days after Hariri announced that he was suspending his resignation pending negotiations over the dissociation policy.

“The consultations will tackle the security situation, the dissociation policy, ties with Arab states, the Taef Accord and the government's situation, and President Aoun will request clear answers on this issues. This also includes the stance on the Israeli threats, including the defense strategy,” Baabda sources told LBCI television.

Hariri had announced Saturday that “there is seriousness in the ongoing contacts and dialogues” and that the other parties seem to be inclined to accept his proposals.

The premier has called for dissociating Lebanon from the regional conflicts through ending Hizbullah’s involvement in them.

Hariri had caused widespread perplexity on November 4 when he resigned during a TV broadcast from Saudi Arabia, citing assassination threats and blasting the policies of Iran and Hizbullah in Lebanon and the region.

After a puzzling mini-odyssey that took him to France, Egypt and Cyprus, Hariri arrived back in Lebanon on Tuesday and then announced that he was putting his decision to quit on hold ahead of negotiations.

Many questions remain unanswered following the unprecedented scenario that saw Lebanon's prime minister resign in a foreign country suspected of keeping him under house arrest and return only after the apparent intervention of France.

But while Hariri and his backers seemed on a collision course with Hizbullah only a few days ago, an apparent behind-the-scenes deal now appears to be restoring the status quo.

Geagea! Enough with this so called wisedome of yours! Your presence in this government acchieves nothing else than disgrace everything you used to stand for!

More BS from one of those lusting for power.

Very disappointing! Him and Saad... they let us down big time.

where is @puppet to list for us why he respects and admires Geagea?