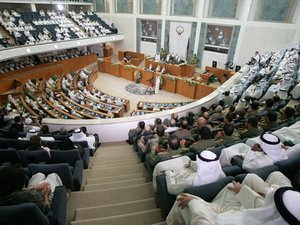 A Kuwaiti court on Monday sentenced to jail 67 people, including an opposition leader and Islamist deputies, over a 2011 raid on parliament, a defense lawyer said.

Nationalist opposition leader Musallam al-Barrak, three Islamist MPs and 63 other dissidents were convicted of violence against police during the takeover of the parliament building, Youssef al-Harbash said.

The lawyer said he planned to file for a mistrial over what he said was the absence of a full defense team.

The remaining defendants were handed sentences ranging from one to seven years.

The 2011 raid on parliament was aimed at forcing the resignation of Sheikh Nasser Mohammed Al-Sabah, then the emirate's prime minister.

Barrak has previously served a two-year sentence for insulting Kuwait's emir. He was released in April.

All 67 of those convicted are members of or sympathize with Kuwait's opposition, which includes both nationalists and Islamists.

While the opposition has called for political reform, including a crackdown on corruption, it has stopped short of targeting the Al-Sabah dynasty which has ruled Kuwait for 250 years.

Kuwait's parliament has been dissolved seven times since 2006 due to frequent feuds between the government and opposition.