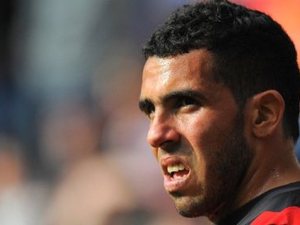 City chiefs are due to meet Milan officials on Thursday to discuss Tevez's future but the Serie A club has made it clear they only want to sign the Argentinian striker on loan.

Mancini however indicated City would take a hardline negotiating stance over the South American's future.

"I hope we can find a good solution for us and Carlos," said Mancini.

"We want Carlos to come back and play football and the best solution for us is to sell him. We can't let him leave on loan."

"When Manchester City buy a player, they have to pay a lot of money. But when we want to sell them, they have to go on loan. This is not good. It is not correct for the other players.

"Manchester City paid Carlos a lot of money for three years. It is correct that if one club, it could be Milan, Juventus, PSG, Inter, want him, they pay Carlos for his value. This is correct."

Tevez has been in Argentina since his future at Eastlands was thrown into jeopardy after his spat with Mancini during the Champions League defeat at Bayern Munich in September.