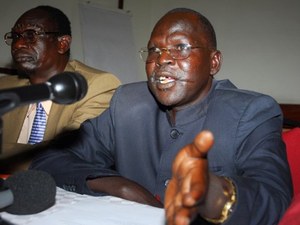 South Sudanese rebel chief George Athor has been killed in a clash with soldiers of the newly independent nation, Vice President Riek Machar said on Tuesday.

One month after vowing to continue his battle against the Juba government, Athor died when a South Sudanese border patrol clashed with "elements" with him in Morobo County at about 1500 GMT on Monday, Machar said.

"George Athor and one other soldier were killed instantly," Machar said in a statement, adding that Athor had sneaked back in through neighboring countries and was on a recruiting drive in Central Equatoria state.

"His body is going to be handed over to his relatives for burial," Machar said, calling on Athor's followers to heed an amnesty and pardon declared in July when the south formally became independent from Khartoum.

"I call on all who rebelled against the government to lay down their arms and join the process of peace and development," Machar said.

At a later press conference he denied the government wanted Athor dead.

"We cannot plan to kill people," he said.

Athor's group alleged on Sunday that two women dressed as Anglican clergy tried to assassinate Athor on December 13 at his headquarters in Jonglei state. Acting on the instruction of South Sudan's President Salva Kiir, they had pistols hidden in their underwear but were caught before hurting Athor, his group alleged.

On November 20 in Nairobi, Athor made his first public appearance since launching his rebellion in April 2010 after claiming electoral fraud cheated him out of the governor's post in Jonglei.

"People must die so we can have peace and can have democracy," the former general said after an earlier meeting with Kiir in Nairobi.

"There is a grave need for peace in South Sudan but unfortunately the other side were not cooperating," the militia leader said. He sought fresh nationwide elections and "two or three ministerial posts."

"President Kiir was positive but that was not the same for the rest of the delegation," he said.

South Sudan accused Athor of acting on behalf of Sudan in a bid to destabilize the country, which won independence in July after the end of a two-decade civil war with Khartoum.

Athor denied he was supported by Khartoum.

"This is not an ethnic or a tribal fight, but about changing the whole system," Athor said.

He vowed to return soon to South Sudan and boasted that other separate southern militia forces followed his command.

But Athor, whose forces were largely holed up in malaria-infested swamp lands, stressed he wanted a peaceful solution to his rebellion.

"We are ready for talks as soon as they (the government) are," he said. "We can reach an agreement because ultimately we don't think that this can be resolved militarily."

Athor's representatives signed a ceasefire in January with Juba -- just days before the south voted overwhelmingly in a referendum to secede from the north -- but fighting broke out weeks later.

"It appears they don't have food so they are targeting the people and taking their cattle," Kuol Manyang said.