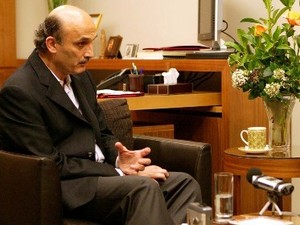 Lebanese Forces leader Samir Geagea hit back Thursday at Free Patriotic Movement chief Jebran Bassil over accusations that the LF has violated the rapprochement agreement with the FPM.

“Though I sensed a positive aspect in Minister Bassil's remarks in terms of his adherence to the Maarab Agreement, I cannot but highlight a host of fallacies that he mentioned in his interview. An agreement means partnership and does not mean one party being at the disposal of the other,” Geagea said in an interview with al-Markazia news agency.

“If President Michel Aoun and Minister Bassil do not mind, and in light of the false accusations against us, I suggest asking the public opinion to judge our agreement. Let everyone know that the agreement, which was based on our support for the new presidential tenure, was very clear in terms of forming a team of LF and FPM ministers that would outline the presidential term's policies,” Geagea added.

“But supporting the presidential tenure does not mean that one party, specifically Minister Bassil, would have the right to outline all policies as the other party claps for him and applauds him,” the LF leader explained.

He however added that the LF is still willing to “strictly commit to the agreement should there be a return to coordination in all issues and files.”

“Otherwise, our support will only take place when it matches our principles,” Geagea added.

You are wasting your time with the FPM, and we have lost our time with you. Very few are the ones around me who still listen to you...

Enjoy your holy alliance with Bassil and Co.