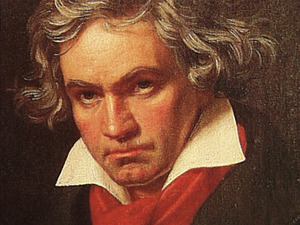 Beethoven first mentioned his hearing loss in 1801 at the age of 30, complaining that he was having problems hearing the high notes of instruments and voices.

By 1812, people had to shout to make themselves understood and in 1818, he started to communicate through notebooks. In his last few years before his death in 1827, his deafness was apparently total.

Writing in the latest issue of the British Medical Journal (BMJ), a trio of scientists in the Netherlands dissected Beethoven's string quartets.

The experts looked at the first violin part in the first movement of each quartet, counting the number of notes above G6, which corresponds to 1,568 Hertz.

Use of higher notes decreased as the deafness progressed, they found.

To compensate, Beethoven used more middle- and low-frequency notes, which he could hear better when music was performed.

But in the late quartets -- written by the time he was totally deaf -- the higher notes returned.

"When he came to rely completely on his inner ear, he was no longer compelled to produce music he could actually hear when performed, and slowly returned to his inner musical world and early composing experiences," says the paper.

The study is authored by Edoardo Saccenti, Age Smilde and Wim Saris of the Netherlands Metabolomics Centre in Leiden.

A video of the research can be seen on (http://www.youtube.com/watch?v=dLYhIwT5A5c&feature=youtu.be).