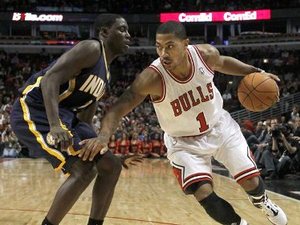 It seemed like something out of a movie script the moment the Chicago Bulls took Derrick Rose with the No. 1 pick in the draft.

That's just another milestone in a rapid and steady rise for the point guard from the city's South Side to stardom with his hometown team.

The reigning NBA MVP agreed to a five-year contract extension with the Chicago Bulls worth approximately $94 million, a person familiar with the situation said.

The person spoke to the Associated Press on the condition of anonymity Tuesday night because the deal had not been finalized. The extension will start in the 2012-13 season, when Rose is eligible to make about $16 million. The Bulls scheduled a news conference for Wednesday, though they won't say what it is for.

"It's something big, but I think I want to talk more about it (Wednesday), with my family and everybody being there," the star point guard said after the Bulls' preseason victory over Indiana on Tuesday night. "But it's definitely something big."

And, teammates say, it was well-earned.

"We're all very excited for him," Carlos Boozer said. "He deserves it. He puts in a lot of effort. I wish the contract was for 10 years."

The chance to join Rose in the backcourt was a big draw for Richard Hamilton. The veteran shooting guard signed with the Bulls last week after being bought out by the Detroit Pistons, and so far, he likes what he sees.

"He works hard," Hamilton said. "He's young. He's 23 years old and the way he plays on the floor is the way he practices. In order to be great in this league, you just can't turn it on (during) games. He really has a great work ethic."

The deal is more of a formality than a surprise. Rose and general manager Gar Forman had indicated it would get done, and it was not hard to see why they wanted to stay together.

The Chicago product went from Rookie of the Year to All-Star to MVP in his first three seasons, becoming the youngest player to win that award. About the only thing he doesn't have is a championship ring, and that's what weighs on him as he enters his fourth season — not the money.

"I think I live a humble life," Rose said. "Of course, I know I'll be able to afford whatever I want, but other than that, there aren't too many things that excite me. Me winning is one of the things. Me being around my family, that's another. Money, that's the last thing I think about."

The Bulls came close to winning it all last season, winning a league-high 62 games and advancing all the way to the Eastern Conference finals before losing to the Miami Heat.

Now, they're looking for more.

Rose has repeatedly pointed the finger at himself for the Bulls coming up short against the Heat in the playoffs. He worked on his inside game in the offseason after expanding his shooting range in previous years, but it's hard to imagine him accomplishing much more than he did last season.

Rose delivered one of the best seasons by a point guard. He also joined Michael Jordan as the only Bulls players to win the MVP award.

The South Side product established himself as one of the league's best players, averaging 25 points and 7.7 assists while leading Chicago to its best season since the championship era with Jordan and Scottie Pippen.

For Rose, the contract extension is just another milestone in a rapid rise from the city's rough Englewood neighborhood to a starring role with the Bulls.

He helped Simeon Career Academy become the first Chicago Public League team to win back-to-back state championships, then led Memphis to the NCAA championship game before the Bulls drafted him with the No. 1 pick in 2008 after defying long odds to win the lottery.

"The Bulls are loyal," Rose said. "They've stayed loyal with me, showed that they trusted me by picking me to come here. I just feel blessed, and I'm just happy that I'm here."