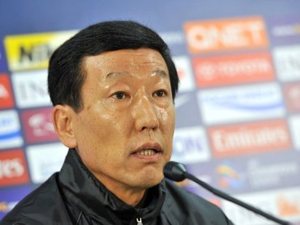 The Korea Football Association said Choi would replace Cho Kwang-Rae, sacked two weeks ago after a shock defeat to Lebanon left the 2002 semi-finalists at risk of missing out on the 2014 World Cup.

Choi, 52, twice guided Jeonbuk to the K-League title, in 2009 and 2011, with the club also winning the 2006 AFC Champions League and finishing runners-up this year.

They top Group B in Asian qualifying on goal difference, level on 10 points with Lebanon and ahead of third-placed Kuwait on eight. The top two teams in the group will reach the final qualifying round.

But South Korea will be eliminated if they lose to Kuwait and if Lebanon defeat or draw with the United Arab Emirates in the final group matches in February.