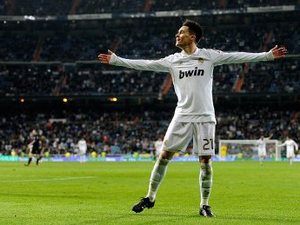 Real Madrid brought the curtain down on 2011 by hammering lowly Ponferradina 5-1 at the Bernabeu on Tuesday to ease into the last 16 of the Copa del Rey.

Already two goals up from the first-leg, Madrid coach Jose Mourinho sent out a largely second-string side that added further goals from Jose Callejon and Nuri Sahin in the opening period.

For Turkey midfielder Sahin it was a first goal since moving to Madrid from Borussia Dortmund in the summer.

French youngster Raphael Varane and substitute Joselu also got on the score sheet after the break before Callejon got his second late on.

Acoran Barrera scored a consolation for third-tier Ponferradina, but that was a minor blip for the tournament holders, who progressed 7-1 on aggregate.

The 2010 Cup winners Sevilla beat third division San Roque 2-1, thanks to a double from Fredi Kanoute, to go through 3-1 on aggregate.

Fresh from winning the Club World Cup in Japan, Barcelona defend a 1-0 first-leg lead when they entertain third division side Hospitalet on Thursday.