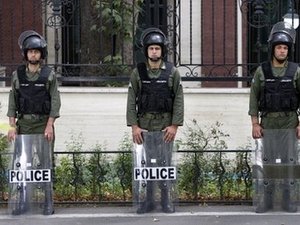 Three policemen in western Iran have been killed by a roadside bomb detonated by Kurdish rebels, an Iranian state-owned newspaper said Thursday.

The report by the Iran daily said Gen. Faramarz Hosseinzadeh, the local chief of border police, and two other policemen were killed after members of the Party for Free Life in Kurdistan, or PEJAK, detonated a roadside bomb near the town of Piranshahr, some 900 kilometers west of Tehran.

It did not say when the incident happened.

In May, five Kurdish activists were hanged after being convicted of membership in PEJAK and of involvement in bombings,

PEJAK is the Iranian wing of the Kurdistan Workers' Party, or PKK, which says it is fighting for autonomy in southeast Turkey.(AP)