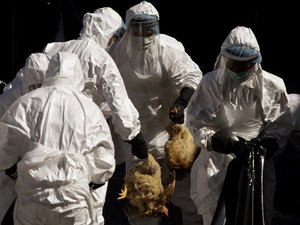 The U.S. government asked scientists Tuesday not to reveal all the details of how to make a version of the deadly bird flu that they created in labs in the U.S. and Europe.

The lab-bred virus, being kept under high security, appears to spread more easily among mammals. That's fueled worry that publishing a blueprint could aid terrorists in creating a biological weapon, the National Institutes of Health said.

But the NIH said it was important for the overall findings to be published in scientific journals, because they suggest it may be easier than previously thought for bird flu to mutate on its own and become a greater threat.

"It's very important research," NIH science policy director Dr. Amy Patterson told The Associated Press. "As this virus evolves in nature, we want to be able to rapidly detect . . . mutations that may indicate that the virus is getting closer to a form that could cross species lines more readily."

Bird flu, known formally as H5N1 avian influenza, occasionally infects people who have close contact with infected poultry, particularly in parts of Asia. It is highly deadly when it does infect people because it's different from typical human flu bugs. The concern is that one day it may begin spreading easily between people.

The NIH paid for two research projects, at the Erasmus University Medical Center in the Netherlands and at the University of Wisconsin, to better understand what might fuel the virus' ability to spread. The NIH said researchers genetically engineered bird flu that could spread easily among ferrets — animals whose response to influenza is similar to humans.

So the government's biosecurity advisers — the National Science Advisory Board for Biosecurity — reviewed the research as it was submitted to two scientific journals, Science and Nature. Following the board's recommendation, the Department of Health and Human Services asked the researchers and journal editors not to publish the full genetic information that could enable someone to copy the work.

Patterson said publishing the general findings, however, could help scientists better monitor bird flu's natural evolution and spur further research into new treatments. The government will set up a way for scientists who are pursuing such work to be given the unpublished genetic details, she said.

Patterson said researchers were making changes in their scientific reports.

But in a statement, Science editor-in-chief Dr. Bruce Alberts said his journal "has concerns about withholding potentially important public health information from responsible influenza researchers" and was evaluating how best to proceed.

"It is essential for public health that the full details of any scientific analysis of flu viruses be available to researchers," he said in a statement. The journal is discussing how "appropriate access to the scientific methods and data could be enabled."