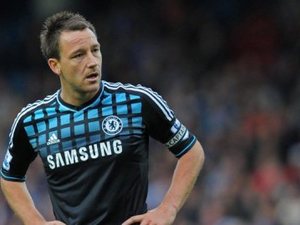 Terry has been ordered to appear in a magistrates court on February 1 over the incident in a Premier League match in October.

Alison Saunders, Chief Crown Prosecutor for London, said: "I have today advised the Metropolitan Police Service that John Terry should be prosecuted for a racially aggravated public order offence following comments allegedly made during a Premier League football match between Queens Park Rangers and Chelsea on 23 October 2011."

She added: "After careful consideration of all the evidence, I am satisfied there is sufficient evidence for a realistic prospect of conviction and it is in the public interest to prosecute this case.

"He is now summonsed with a criminal offence and has the right to a fair trial. It is extremely important that nothing should be reported which could prejudice his trial."

After the allegation was made, Terry issued a statement saying he was "disappointed that people have leapt to the wrong conclusions about the context of what I was seen to be saying to Anton Ferdinand.

"I would never say such a thing, and I'm saddened that people would think so," he added.

Chelsea have been steadfast in support of Terry and ahead of the CPS decision, manager Andre Villas-Boas said Wednesday: "The only thing I know is that I will be fully supportive of John Terry, whatever the outcome.

"We know exactly his human values and personality. They are never in doubt."

The decision to press charges came a day before Chelsea, fourth in the table, travel to third-placed Tottenham for a highly anticipated London derby in which Terry is expected to play.