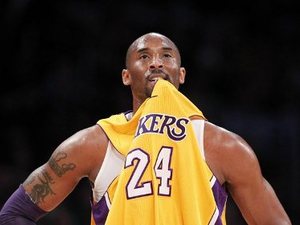 Kobe Bryant did not play in the Los Angeles Lakers' preseason finale against the Clippers on Wednesday night because of a torn ligament in his right wrist, and his status for the season opener on Christmas Day is up in the air.

A MRI revealed the extent of the injury, which occurred early in the in the third quarter of the Lakers' 114-95 loss to the Clippers on Monday night. Bryant was examined by Dr. Steven Shin of the Kerlan-Jobe Orthopaedic Clinic. Depending on the degree of the tear, he could be sidelined as long as three to four weeks.

"He's day-to-day. As soon as I figure it out, I will let you guys know," said coach Mike Brown, who took over this season after the retirement of Phil Jackson. "The doctor has to clear him. Guys will go through the year and get hurt, obviously. Sometimes they'll get hurt and can't play, sometimes they'll get hurt and still can play. It just depends on the situation. Come Sunday, we'll see how it is. There's a chance, though, that he could play Sunday."

Bryant, who shoots right-handed, was sent crashing to the floor by Clippers center DeAndre Jordan on a blocked layup and came up holding the wrist. He stayed in the game for another three minutes, then went to the bench for a good stretch and was allowed to return to the floor during the fourth quarter.

Bryant practiced Tuesday, but did not participate in Wednesday morning's shootaround. He did not talk to the media before the game and camped out in the trainer's room.

After Monday's game, when asked about the wrist, Bryant said it wasn't a problem. Brown's understanding was that his best player did not need surgery. Last season, Bryant played in all 82 games for the fourth time in his career. And with this season reduced to 66 games because of the 149-day lockout, every game without him is a bigger deal. But the NBA's sixth all-time leading scorer continually has demonstrated his ability to play through pain at a high level.

"He came up to me in practice yesterday and said: 'My wrist is a little sore, but I'm good to go,'" Brown said. "And when it got to competitive stuff, where it was 5-on-5, he scored runners over defenders with his left hand. So he was playing a game within himself, I guess."