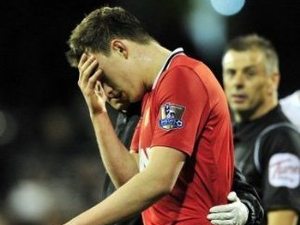 Manchester United kept up their pursuit of leaders Manchester City with a 5-0 victory at Fulham but the three points came at a cost as England duo Phil Jones and Ashley Young were injured.

Both will now miss games over the holiday period and beyond. Jones, who was back in defense to replace Rio Ferdinand after a lengthy spell in midfield, was forced off early on after being hit in the jaw by the arm of Clint Dempsey.

Young, who had replaced him in the 20th minute, was forced off in the second half following a collision with Dickson Etuhu.

It is feared Jones, 19, has suffered a fracture and as a result will be out for six weeks.

"Phil Jones got an elbow to the jaw and we'll send him for an X-ray tomorrow. It doesn't look good. Rio will be back for the Blackburn game on New Year's Eve, Phil is a concern and Ashley is out for two or three weeks."

Manchester City won 3-0 at home to Stoke City to remain two points clear at the top but United's performance suggested they were in no mood to let the gap widen.

Danny Welbeck gave them a fifth-minute lead after Nani had run half the length of the pitch down the left wing and the Portugal international made it 2-0 himself just before the half-hour mark.

Ryan Giggs continued his remarkable record of having scored in every Premier League season so far with the third just before half-time, with a shot that took a big deflection off Philippe Senderos, Fulham's Switzerland international defender.

Fulham improved after the break but could not beat goalkeeper Anders Lindegaard, who had been picked ahead of David de Gea.

Late additions from Wayne Rooney, who fired in an impressive long-range effort, and substitute Dimitar Berbatov via a cheeky back-heel, made the winning margin a convincing one.

"The performance in the first half was as good as we have played all season," Ferguson added.

"You would have thought the third goal would have killed Fulham but they came out very aggressively in the second half. They changed the pattern of the game but on the counter we always looked a threat."

Rooney was also pleased with the way they had controlled the game and forecast more of the same in the final fixtures of 2011, against Wigan and Blackburn.

"We played really well and we took our chances," he said. "It was comfortable. In the second half we took our foot off the gas but we were always in control and we knew we were going to win the game.

"We have a lot of games coming up so it was nice to not run as much. We knew that if we could win we have two home games coming up. We need to keep pushing and if City slip up we'll be there. It's an amazing turnaround in our away form."

Fulham manager Martin Jol admitted his side's first half display had been substandard and will insist on an improvement on Boxing Day at Chelsea.

"I am angry and disappointed," he said. "They had eight attempts on goal and scored five goals. They played around us on the flanks and we did not defend well. Nani scored a header which tells you all. We let ourselves down. We improved and could have scored a few but it is easy when you are 3-0 down.

"They have a lot of quality but we were not aggressive enough. Conceding early is not good for your confidence. It was too easy for them. We have to pick ourselves up because there are a lot of teams on the same amount of points."