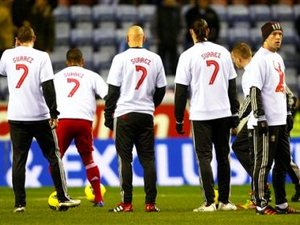 The lawyer for Luis Suarez announced plans Wednesday to appeal against the striker's eight-game ban for racially insulting Manchester United's Patrice Evra, while his Liverpool teammates publicly backed their teammates in a statement.

Alejandro Balbi, who is Suarez's lawyer and agent, told reporters in Uruguay about the plans to appeal just as the forward was getting ready to play in Liverpool's 0-0 draw at Wigan in the Premier League.

The English Football Association also fined Suarez 40,000 pounds ($62,000), but the Uruguay forward can continue playing until the appeal process reaches its conclusion.

"The sanction has two items, the games suspension and the monetary. It will be a total appeal," Alejandro said.

"The counts of racism that were made against him are not true," Balbi added. "He firmly believes that this harsh sanction can be overturned."

He added that Suarez "is very affected" by the English Football Association's verdict, but is also "calm because of the massive support of the club, the coach, his teammates and his captain."

They also released a statement expressing their anger at the FA's punishment.

"Luis Suarez is our teammate and our friend and as a group of players we are shocked and angered that he has been found guilty by the FA," Liverpool's squad said in a joint statement. "We totally support Luis and we want the world to know that. We know he is not racist ... we have lived, trained and played with Luis for almost 12 months and we don't recognize the way he has been portrayed."

The FA, though, accepted Evra's allegation that Suarez had directed a racial insult at him during United's Premier League match at Liverpool on October 15. If the appeal is rejected, the FA could increase the suspension.

"We will continue to support Luis through this difficult period, and as a popular and respected friend of all his teammates, he will not walk alone," the Liverpool squad said, referencing the club's anthem.

Balbi highlighted that the only evidence taken into account by the FA disciplinary panel was "the word of Evra," a fact that Liverpool also underlined Tuesday in defense of the player.

Suarez has also received support from his Uruguay teammates.

"I can't believe it. It's a big error that is being committed," Uruguay captain Diego Lugano said. "It's obvious that England has a problem with racism that they are trying to eradicate — and that's fine — but this decision does not have solid arguments. Luis is a victim. I don't understand how a player like Evra can do this.

"We all know the kind of person Luis is and the values he has. We are all very hurt. When one of our teammates is suffering, we all suffer. The only thing left is to support him and be with him."

Another Uruguay teammate, Napoli's Walter Gargano, described the situation as a "barbaric fiasco."

"Now we've got to get behind Luis more than ever," he told Uruguay radio station 1010 AM.

Later on Wednesday, Liverpool were held to a draw against Wigan after goalkeeper Ali al-Habsi saved a penalty kick from Charlie Adam to secure a 0-0 draw and another valuable point in his team's fight against relegation from the Premier League.

Al-Habsi had already pushed over a free kick from Suarez, who started for Liverpool after he was banned for eight matches for racially abusing Evra, when Gary Caldwell handled an overhead kick from the Uruguay striker.

Adam took the resulting penalty but it was blocked by al-Habsi.

Wigan has now lost just one of its last six matches while sixth-place Liverpool has scored only three goals in its last four games.

The 24-year-old Suarez was involved in many of Liverpool's early attacks. Adam his a free kick into the defensive wall before Suarez, Maxi Rodriguez and Stewart Downing combined to set up Jordan Henderson, whose shot was parried by al-Habsi.