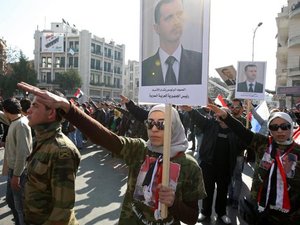 A veteran Sudanese military intelligence officer was heading to Cairo on Thursday for preparatory meetings to lead an Arab League observer mission aiming to end nine months of violence in Syria.

General Mohammed Ahmed Mustafa al-Dabi was named on Tuesday to head the team, a day after Syrian President Bashar Assad's embattled regime agreed after weeks of stalling to accept the observers.

Dressed in traditional white "jalabiya" robes, turban, and leopard-patterned shoes, he posed for photos and offered tea and cake.

His manner was easy-going but the curriculum vitae he distributed outlined a hard-core military background:

- Chief of military operations against the insurgency in what is now South Sudan, 1996-1999

Dabi served as ambassador to Qatar from 1999 to 2004 but also held four separate positions related to Sudan's Darfur region, where fighting broke out in 2003 between non-Arab rebels and the Arab-dominated Khartoum regime.

Among his duties there, Dabi served in 2005 as the regime's pointman for dealing with United Nations Security Council Resolution 1591 on sanctions and other measures related to the conflict.

Sudan's President Bashir is among six people who are being sought or are before the Hague-based International Criminal Court (ICC) for crimes allegedly committed in the Darfur region.

Dabi, born in Berber town in Nile state, declined to make any comment on his Arab League mission before meeting in Egypt with the group's Secretary General Nabil al-Arabi.

The observers are part of an Arab plan endorsed by Syria on November 2. It also calls for a halt to the violence, releasing detainees and the withdrawal of the military from towns and residential districts.

The mission will begin work on Thursday with an advance team arriving to organize the logistics.

The U.N. estimates that more than 5,000 people have been killed in the Assad regime's crackdown since mid-March.

Syrian opposition leaders have dismissed the observer mission as a mere "ploy" by Damascus, something the regime denies.

Syrian Foreign Minister Walid Muallem has said the observers will be able to access so-called "hot zones" but not sensitive military sites.