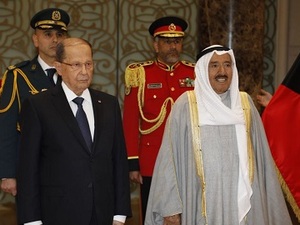 President Michel Aoun arrived for an official visit to Kuwait on Tuesday where he was received by Kuwaiti Emir Sheikh Sabah al-Ahmed al-Jaber al-Sabah, the National News Agency reported.

The President and the Emir headed to the main palace of the Emir, the Bayan Palace, where Aoun will stay during his two-day visit, NNA added.

Talks began shortly after and focused on bilateral relations between the two countries, as the two men agreed to “promote cooperation in all fields.”

They agreed on the necessity of “activating joint Arab efforts,” and the need for the “upcoming Arab summit to pave way for the unification of Arab positions and restoring stability.”

The two men denounced the US decision that recognized Palestine as the capital of Israel.

The Kuwait Emir told Aoun that he has "instructed" the Kuwait Fund for Economic Development "to activate economic aid for Lebanon and to respond to its needs.”

Aoun's visit aims to revive relations with the Gulf country where he is scheduled to hold talks with other senior Kuwaiti officials.

Best traveling president we have ever had!

Well deserved trip for the quisling, I am sure this this trip will allow Lebanon its seat back in the worlds stage as an advancing nation. What a joke....next he will take trip to Senegal to help balance our ailing economy.