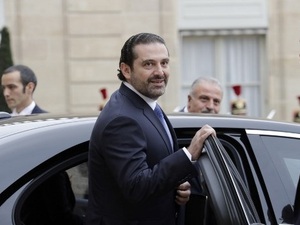 Prime Minister Saad Hariri on Tuesday arrived in Switzerland to participate in the meetings of the World Economic Forum in Davos.

Hariri's office said the premier will take part on Tuesday evening in a dinner banquet that will be thrown by Klaus Schwab, the founder and executive chairman of the Forum.

On Wednesday, Hariri will hold separate talks on the Forum's sidelines with the leaders of Jordan, Switzerland, Brazil, Italy, Iraq, Belgium, Armenia and Norwar. He will also meet with International Monetary Fund chief Christine Lagarde.

Hariri said in a statement before leaving to Davos that Lebanon is “committed to the United Nations Security Council resolution that established the Special Tribunal for Lebanon and looks forward to the day when justice will say its word in the assassination of Martyr Prime Minister Rafik Hariri and his martyr companions.”

Rafik Hariri was assassinated in a massive and shocking suicide bombing in 2005 that destabilized the country.

Five Hizbullah suspects are being tried in absentia by The Hague-based STL over the attack.

So when will the STL openly talk about Kizballahs involvement with this crime?