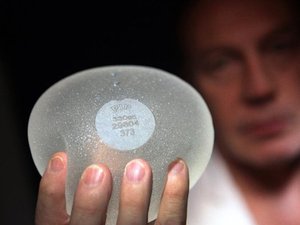 France's health ministry has said there is no cancer risk from breast implants made by local firm Poly Implant Prothese (PIP) but has recommended that women with the implants have them removed after eight cases of cancer.

Women with PIP implants "do not have a higher risk of cancer than women who have implants manufactured by other firms", a statement said but added there were "well-established risks of ruptures."

However Health Minister Xavier Bertrand called for their removal as a "preventive measure," while stressing that this was not "urgent."

The now-bankrupt PIP was shut down and its products banned last year after it was revealed to have been using non-authorized silicone gel that caused abnormally high rupture rates of its implants.

Facing financial difficulties, the company, once the world's third-largest producer of silicone implants, replaced medical-grade silicone in its implants with industrial-strength material.

Documents obtained by Agence France Presse on Wednesday showed that tens of thousands of women in more than 65 countries have implants produced by PIP.

According to PIP's 2010 bankruptcy filing in the French city of Toulon, it exported 84 percent of its annual production of 100,000 implants. Between 2007 and 2009, 50 to 58 percent of its exports went to South American countries including Venezuela, Brazil, Colombia and Argentina, the filing showed. In the same period, 27 to 28 percent of exports went to western European nations including Britain, Spain, Italy and Germany.

Prosecutors in Marseille, near the firm's home base of Seyne-sur-Mer, have received more than 2,000 complaints from French women who received the implants and have opened a criminal investigation into the firm.

Yves Haddad, a lawyer for 72-year-old PIP founder Jean-Claude Mas, said his client was prepared to face prosecution and denied the implants could be linked to health problems.

"For the moment there is no evidence that the product can cause illness," Haddad said.