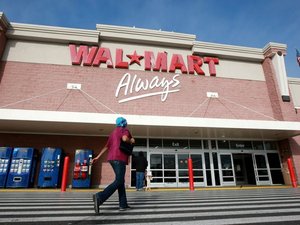 Walmart has pulled infant formula from the shelves of its 3,000 stores after two babies in Missouri got sick and one of them died, the retailer said Thursday.

Health officials have not yet determined whether the bacterial infection which sickened the newborns was linked to the powdered formula, but Walmart said it was pulling the product "out of an abundance of caution."

"We extend our deepest condolences to this baby boy's family as they try to come to grips with their loss," Walmart spokesperson Dianna Gee told Agence France Presse.

The retailer only removed Enfamil formula from the lot number in question: ZP1K7G, Gee said.

"Walmart customers who may have purchased the item at our stores can return it for a full refund or exchange it for another brand of formula," she added.

The formula manufacturer said it tests all of ingredients and products prior to shipment and does not believe the bacteria was present at time of sale.

"The batch of our product used by the child's family tested negative for Cronobacter when it was produced and packaged, and that has been reconfirmed from our batch records following this news," spokesman Chris Perille said.

"We are highly confident in the safety and quality of our products - and the rigorous testing we put them through."

Mead Johnson Nutrition is "working with the health authorities to support their efforts to identify the source or cause of this infant's infection," he said, adding "our hearts go out to the child's family for their tragic loss."

Missouri health officials have sent the formula to federal labs for testing and urged parents to be careful because "powdered infant formulas are not commercially sterile products."

They noted that powdered infant formula is the only type of food linked to outbreaks of this type of infection and that "no exclusively breastfed infants have been reported to have" the infection.

They urged parents to careful store powdered formula, prepare only small amounts that will be used right away, sterilize bottles, boil water used to prepare formula for at least two minutes and wash their hands thoroughly in order to prevent contamination.

"Until testing is completed it cannot be determined whether the illness is linked to Enfamil Newborn Formula 12.5 oz. cans Lot # ZP1K7G or an outside source," the health department said in a statement.