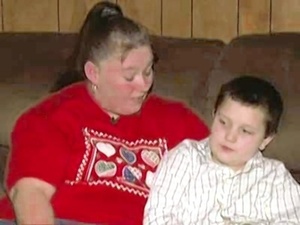 A 9-year-old autistic boy who misbehaved at school was stuffed into a duffel bag and the drawstring pulled tight, according to his mother, who said she found him wiggling inside as a teacher's aide stood by.

The mother of fourth-grader Christopher Baker said her son called out to her when she walked up to him in the bag Dec. 14. The case has spurred an online petition calling for the firing of school employees responsible.

"He was treated like trash and thrown in the hallway," Chris' mother, Sandra Baker, said Thursday. She did not know how exactly how long he had been in the bag, but probably not more than 20 minutes.

"The employees of the Mercer County Public Schools are qualified professionals who treat students with respect and dignity while providing a safe and nurturing learning environment," Davis said in a statement.

Chris is a student at Mercer County Intermediate School in Harrodsburg in central Kentucky. The day had barely begun when his family was called to the school because Chris was acting up. He is enrolled in a program for students with special needs.

Walking toward his classroom, Baker's mother saw the gym bag. There was a small hole at the top, she said, and she heard a familiar voice.

"Momma, is that you?" Chris said, according to his mother.

A teacher's aide was there, and Baker demanded that her son be released. At first, the aide struggled to undo the drawstring, but the boy was pulled out of the bag, which had some small balls inside and resembled a green Army duffel bag, Baker said.

"When I got him out of the bag, his poor little eyes were as big as half dollars and he was sweating," Baker said. "I tried to talk to him and get his side of the reason they put him in there, and he said it was because he wouldn't do his work."

Baker said when school officials called the family to pick him up, they were told he was "jumping off the walls." Days later, at a meeting with school officials, Baker said she was told the boy had smirked at the teacher when he was told to put down a basketball, then threw it across the room.

At a meeting with school district officials, the bag was described as a "therapy bag," Baker said, though she wasn't clear exactly what that meant. She said her son would sometimes be asked to roll over a bag filled with balls as a form of therapy, but she didn't know her son was being placed in the bag. She said school officials told her it was not the first time they had put him in the bag.

So far, almost 700 people have signed a petition on the website change.org. Lydia Brown, an autistic 18-year-old Georgetown University freshman from Boston, said she started it after reading a story about Chris.

"That would not be wrong just for an autistic student. That would be wrong to do to anyone," Brown said.

Advocates for the autistic were outraged.

Landon Bryce of San Jose, Calif., a former teacher who blogs about issues related to autism, said the school's treatment of Chris was "careless and disrespectful."

"A lot of the damage that we do to students with all kinds of disabilities is by treating them as though they deserve to be treated in a way that's different from other people," Bryce said.

Baker said she heard different accounts about her son's behavior that day.

Baker stopped short of calling for the dismissal of school employees, but she said they should be suspended. They also need more training, she said.

In Kentucky, there are no laws on using restraint or seclusion in public schools, according to documents on the state Department of Education's website.

A July letter from the state agency to special education directors said the state had investigated two informal complaints this year.

In one, "a student (was) nearly asphyxiated while being restrained," and in the other, a student vomited from panic attacks after spending most of an academic year "confined to a closet, with no ventilation or outside source of light," according to the letter.

Baker's case was first reported by WLEX and WKYT.