Eva Peron May Have Had Secret Lobotomy 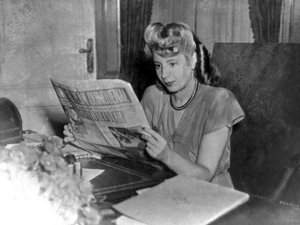 Eva Peron, the glamorous first lady of Argentina in the 1940s and 50s, may have been given a secret lobotomy shortly before her death at age 33, scientific researchers said in a new report.

The study, published on the website of the academic journal World Neurosurgery, adds a new twist to the existing enigmas over Peron's agonizing death and subsequent burials.

According to the researchers, led by Yale University's Daniel Nijensohn, who is from Argentina, photographic evidence strongly suggests that Peron was given the then-common, but now out-of-favor brain surgery to help her cope with cancer-related pain before dying in 1952.

"Eva Peron suffered from excruciating intractable pain and increasing anxiety, agitation, and belligerence from metastatic uterine cancer at the end of her life," the report states.

"Based on our evidence... it appears she underwent a prefrontal lobotomy in the last months of her illness in 1952. This top-secret surgical procedure, accepted then as treatment for those clinical indications, would have been performed in Buenos Aires."

As the research highlights, Peron's health has always been a subject of fierce attention, along with the rest of a life led in tempestuous political times and portrayed in the Tim Rice and Andrew Lloyd Webber musical "Evita," and later a film with Madonna.

That would explain why the lobotomy -- in which sensory impulses are severed -- would have been covered up for so long.

"The sensitive nature of the operation and its political and emotional implications is still relevant today and potentially incendiary despite the time that has elapsed," the researchers wrote.

The conclusion, which is not definitive, is based partly on a previously published but little-noticed statement by a George Udvarhelyi, a neurosurgeon who died in 2010 and who said he was part of Peron's medical team.

Udvarhelyi clearly stated having performed a lobotomy. The researchers then tracked down X-rays, photographs and video footage shot during a documentary and found what they say are tell-tale signs of cavities and a deep indentation that would have been left by the surgery.

"Photographs of Eva at the end of her illness show her looking emaciated and lobotomized, with an obvious head indentation at the coronal level," the report says.

However, the team admits: "Absolute confirmation of a prefrontal lobotomy is not currently possible. Exhumation is not a near-term option and will not be for a long time. Perhaps future historians will be able to unveil the truth by studying Eva Peron's skull, looking for the burr holes that would have provided access to the instruments necessary for the lobotomy."

Maria Eva Duarte de Peron was married to president Juan Peron and was first lady from 1946 until her death.

Her death on July 26, 1952, sparked mass public grieving and her body was embalmed, but then disappeared, only to be recovered 14 years later in Italy and returned to Juan Peron.

In 1974, the military government at the time had the remains given back to the Duartes to be interred in the family mausoleum in Buenos Aires.