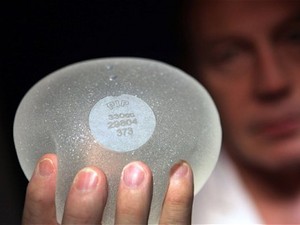 Interpol on Friday issued a "red notice" seeking the arrest of Frenchman Jean-Claude Mas, founder of the breast implant company at the center of a widespread women's health scare.

Mas, 72, whose picture appears on the Interpol website, is listed as being sought in Costa Rica for offences concerning "life and health."

France's health ministry Friday advised 30,000 women with breast implants made by the now-bankrupt Poly Implant Prothese (PIP) to have them removed, saying that while there is no proven cancer risk, they could rupture.

Tens of thousands of women in over 65 countries around the world have the same implants, made from industrial rather than medical quality silicone. Most of them live in South America and western Europe.

Some 42,000 women in Britain are thought to have the implants, according to a government watchdog, the Medicines and Healthcare Products Regulatory Agency.

The agency said it had received 411 reports of PIP implants failing in British patients since 2001.

More than 250 British women are taking court action against clinics where they had operations to insert PIP implants, and others are expected to follow suit.

PIP, once the world's third largest breast implant company supplying more than 100,000 implants a year, was shut down and its products banned last year after it was revealed to have been using the non-authorized silicone gel.

Interpol's red notice is tantamount to an international arrest warrant, though the agency, as a facilitator of cooperation among national police forces, does not have the authority to issue warrants in the formal sense.

The two Interpol photos show Mas wearing a grey and white beard, one with and one without glasses, holding a sign with the date June 1, 2010 on it.