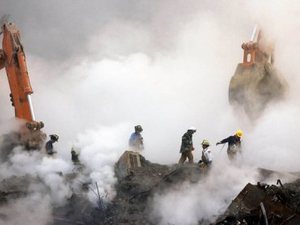 More than 1,600 people who filed lawsuits claiming that their health was ruined by dust and smoke from the collapsed World Trade Center must decide by January 2 whether to keep fighting in court, or drop the litigation and apply for benefits from a government compensation fund.

For some, the choice is fraught with risk.

Federal lawmakers set aside $2.76 billion last winter for people who developed illnesses after spending time in the ash-choked disaster zone.

But to be considered for a share of the aid, all potential applicants must dismiss any pending lawsuits by the deadline and give up their right to sue forever over September 11, 2001, health problems. Anyone with a lawsuit still pending on Jan. 3 is barred from the program for life.

The government program is attractive because it spares the sick from having to prove that their illness is related to Sept. 11, and that someone other than the terrorists put them in harm's way. But applicants won't know for months, or even years, how much money they might eventually receive from the program. That means some people may give up their lawsuits and find out later that they only qualify for a modest payment.

Others face a deeper problem. People exposed to trade center dust have blamed it for hundreds of illnesses, but currently the fund only covers a limited number of ailments, including asthma, scarred lungs and other respiratory system problems. That list does not currently include any type of cancer, which scientists have yet to link to trade center toxins.

But the very possibility that cancer could, someday, be covered has led some plaintiffs to drop their lawsuits anyway.

"In a sense, I've weighed my options and rolled the dice believing that the country I helped is not going to let me down," said former New York City police detective John Walcott, who retired after being diagnosed with acute myelogenous leukemia in 2003.

He decided a few days before Christmas to drop his case, saying he had come to believe he would never get anything out of the legal system.

"The court system was set up for attorneys to make a lot of money," he said. He added that at age 47, he is tired of a court fight that had no end in sight. "I'm done with 9/11. I can't go forward with my life and family and live in peace with this hanging over me."

The special master overseeing the compensation fund, Sheila Birnbaum, acknowledged that the deadline would put some people in a tight spot, especially if they have an illness that isn't currently covered by the fund.

"That is one of the dilemmas," she said.

Birnbaum noted, though, that the law gives her no wiggle room. Anyone who has a lawsuit active on Jan. 3 will be disqualified from consideration, she said, even if their illness is later deemed to be covered.

"It's a hard decision that they have to make," she said.

The lengthy application process for the fund began in October, and Birnbaum said she expected thousands to apply. She could not say how many might do so by the time the fund closes years from now.

Lawyers who represent people with pending cases said they have been going over the pros and cons with their clients for several months, to see which option might suit them better.

"It's a complicated analysis," said attorney Gregory Cannata, whose firm represents about 100 people, including laborers brought in to repair damaged buildings and cleaners who swept tons of dust from office suites.

Cannata said that for the most part, his clients have decided to stick with their lawsuits, in part because of the possibility of a larger payout than they might receive under the government program.

Police officers, firefighters and city contractors who cleared away the 9/11 rubble make up only a small slice of the people facing the dilemma. Most of the more than 5,000 city workers who filed lawsuits claiming that the city had failed to protect them from the dust settled their cases in 2010, before the compensation fund was created.

Walcott was one of a few who rejected the deal, worth more than $700 million. Under the law, people who settled previously will be allowed to apply for government benefits. Any award they receive will be reduced by whatever they got from the legal settlement.

In addition to people with legal claims already pending, thousands more New Yorkers have become ill because of exposure to the dust. They will have to decide in the coming years whether to sue someone over their illness or try their luck in the government program.

If too many people apply for aid from the compensation fund — including people with common illnesses that may, or may not, have anything to do with Sept. 11 toxins — the nearly $2.8 billion set aside by Congress may get exhausted quickly. Adding just 1,000 people with cancer to the program could eat up $1 billion, said Noah Kushlefsky, an attorney with the firm Kreindler & Kreindler.

"The real question is, how many more cases are there out there?" Kushlefsky said.

Enough, it seems, to keep both the courts and the 9/11 fund administrators busy for some time yet.