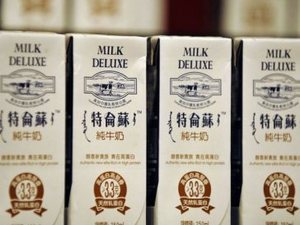 China has discovered excessive levels of a cancer-causing toxin in milk produced by one of the nation's leading dairy companies, the firm said, in the latest in a series of food safety alarms.

The government's quality watchdog found high levels of an aflatoxin, which is caused by mold, in milk produced by the Mengniu Dairy Group, the company said in a statement issued Sunday.

Mengniu said the milk, produced at one of its plants in the southwestern province of Sichuan, was tested before being sold so the contaminated milk never reached the market.

China is trying to crack down on product safety violations to reassure citizens and restore faith in the government after a series of high-profile scandals.

Milk was at the centre of China's biggest food safety scandal in 2008 when the industrial chemical melamine was found to have been illegally added to dairy products to give the appearance of higher protein content.

At least six babies died and another 300,000 became ill after drinking milk tainted with melamine.

Product safety problems have been found in goods ranging from pharmaceuticals to cooking oil. In September, the government arrested 32 people over the sale of cooking oil made from leftovers taken from gutters.

Aflatoxins can be found in milk after cows consume feed contaminated by mould and can increase the risk of cancer, including liver cancer, according to the World Health Organisation.

Mengniu said the products had been destroyed, and apologised to consumers.

The General Administration of Quality Supervision, Inspection and Quarantine made the latest discovery in nationwide testing of 200 dairy products made by 128 companies, the agency said separately.