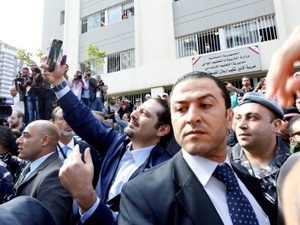 Prime Minister Saad Hariri has launched an app to share selfies with his supporters as he campaigns for re-election in the country's first parliamentary polls in almost a decade.

Long a fan of selfies, Hariri, 48, called on his social media followers to use the app to share photos in which he appears by their side.

The app launch comes ahead of the elections on May 6, with many among the country's almost 600 candidates seeking to woo young Lebanese on social media.

Hariri leads al-Mustaqbal Movement, which is fielding 37 candidates including himself in the first legislative polls since 2009.

The premier has taken selfies with a wide range of supporters and even world leaders over the years.

Once they have downloaded the new app, Hariri fans can admire a collection of amateur portraits starring the prime minister, grinning with his slicked-back hair amid his supporters.

They can also add their own photos with the leader.

At a recent rally, he promised a group of 6,000 women to take a selfie with each of them if he won.

The publicity stunt, captured in a video that was shared widely, sparked criticism in a country that has faced a series of political dramas in recent years and is struggling to avoid an economic crisis.

"A selfie to a background of debts," mocked one user on Facebook, alluding to rapidly raising debts in the world's third most indebted country, according to the International Monetary Fund.

But an enthralled follower wrote: "May God protect you, king of selfies."

In November, Hariri announced his resignation in a surprise televised address from Saudi Arabia that sent tremors through Lebanon.

Weeks later, following consultations with the various political groups in Lebanon, Hariri announced he was withdrawing it.

LoL selfies are so 2017! You’re so outdated Mr Hariri, another reason to boycott Mustaqbal this year!!!! Don’t forget your talisman against the evil eye :p