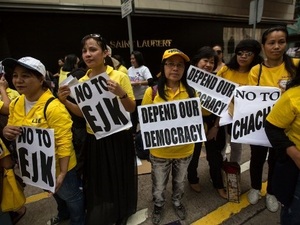 Kuwait said Wednesday it is expelling the Philippine ambassador and recalling its envoy from Manila as tensions rise over the treatment of domestic workers.

Official news agency KUNA said the Philippine ambassador had been given a week to leave oil-rich Kuwait, amid a diplomatic row between the two nations sparked by the murder of a Filipina maid.

An official at Kuwait's foreign ministry told AFP that Philippine ambassador Renato Pedro Ovila had been summoned to be informed of his expulsion.

The move comes despite an apology on Tuesday by Philippine foreign secretary Alan Peter Cayetano, after videos emerged of embassy staff helping Filipinos flee from allegedly abusive employers in Kuwait.

Kuwait was furious about the videos, saying the rescues were a violation of its sovereignty, straining ties already hit by Philippine President Rodrigo Duterte imposing a ban on Filipino workers moving to the Arab Gulf state.

On April 1, a Kuwaiti court sentenced to death in absentia a Lebanese man and his Syrian wife for the murder of the maid, Joanna Demafelis, whose body was found in a freezer in February.

Some 10 million Filipinos work abroad and the money they remit back is a lifeline for the Philippine economy.