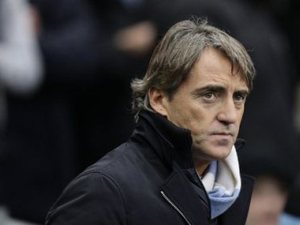 Roberto Mancini bemoaned Manchester City's Christmas fixture schedule after watching his team surrender their lead at the top of the Premier League.

City were held to a 0-0 draw at West Bromwich Albion on Boxing Day and are now top by virtue of goal difference alone after rivals Manchester United thrashed Wigan 5-0.

By the time City face Sunderland on New Year's Day they are likely to have slipped to second with United in action against Blackburn 24 hours earlier.

However, it was not the fact his team had allowed their lead at the top to slip which infuriated City manager Mancini, and the Italian instead took aim at the scheduling of their Christmas calendar to accommodate the television cameras.

Mancini's team -- who failed to score in the league for the first time this season -- will have just two days to prepare to face Liverpool on January 3, while United will have double that amount of time with their previous match against Newcastle having been switched to Friday 30 December - again for television.

"I am disappointed and not happy with this situation," Mancini said. "To have just two days when everyone else is having at least three days is not correct.

"I don't know why this is - well I do, it's for TV. To play twice in 48 hours will make a difference, in the run of fixtures we are currently in.

"In this moment it is not easy. I think United will win their next game. It is more difficult for us going away to Sunderland and then having to play within 48 hours again."

But Mancini insists his team's title dream remains very much alive because his squad is strong enough to last the hectic pace of an English season.

"If you want to win the title, we have to compete well with United. They have a strong team but we are strong enough to do this," he said.

"But we have a good focus and in January that is important. I'm confident we can do good job by the end. It's important to stay in with a chance of title."

However, Mancini admitted his team will have to improve on their display at the Hawthorns, where they dominated possession but were unable to find a way through the Baggies' resolute defense.

"Sometimes you don't win. We know that it is impossible to stay top for all 38 games but I think generally we will be in there," he said.

"Every team has a plan but if we don't score in the first half, it's difficult. We need to improve in this situation."

West Brom head coach Roy Hodgson was thrilled with his team's defensive display as they built on last Wednesday's 3-2 win at Newcastle.

"We don't stop many sides scoring," said Hodgson. "We are not a great clean sheet team so it was great to do it against a side of Manchester City's caliber.

"They have got to be pleased with that, we knew the magnitude of the task. We had to be at our best to try to keep them at bay, it was a very hard working performance defensively and we deserved the point we got, earning it by playing in the right manner."