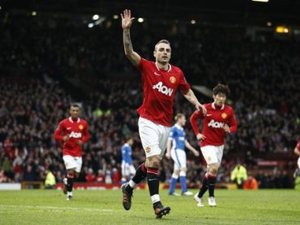 Dimitar Berbatov fired Manchester United level on points with Manchester City as his hat-trick inspired a 5-0 win over 10-man Wigan, while the Premier League leaders were held to a 0-0 draw at West Bromwich Albion on Monday.

Berbatov has been a bit-part player for long periods this season but the Bulgarian striker seized a chance to replace the rested Wayne Rooney with a clinical treble and further goals from Park Ji-Sung and Antonio Valencia destroyed third bottom Wigan.

United's five-goal spree -- their second in six days after a 5-0 win over Fulham -- means City are now top only on goal difference after Roberto Mancini's side suffered a rare setback at the Hawthorns.

City, who were five points clear of United earlier this month, enjoyed most of the possession, but couldn't find a way past Albion goalkeeper Ben Foster with Mario Balotelli hitting the woodwork and also having a goal disallowed.

At Old Trafford, Sir Alex Ferguson played midfielders Valencia and Michael Carrick in defense, but Park put the hosts ahead in the eighth minute when the South Korea midfielder converted Patrice Evra's cross.

United got another boost when Wigan striker Conor Sammon was harshly dismissed for an elbow on Carrick just before half-time.

The champions took full advantage as Berbatov increased their lead with a clinical finish in the 41st minute.

Berbatov added his third goal in two games with another cool strike from Valencia's pass in the 58th minute.

Former Wigan star Valencia struck in the 75th minute and Berbatov completed his treble from the penalty spot three minutes later after Park was tripped by Antolin Alcara.

"I thought it was a softish one in that I don't think the boy acted intentionally. It was a bit harsh, I have to say that," he said.

Meanwhile, Liverpool's challenge for a Champions League place was dented as struggling Blackburn earned a 1-1 draw an Anfield.

Rovers, beaten in their previous three matches, took the lead in first half stoppage time when Reds midfielder Charlie Adam deflected Morten Gamst Pedersen's corner into his own net.

Maxi Rodriguez equalized with a header from Martin Skrtel's flick in the 53rd minute and Reds boss Kenny Dalglish sent on England midfielder Steven Gerrard, finally back from an ankle injury, for the final 20 minutes.

"The chances we create are good, but we can't keep saying we have come up against an inspired goalkeeper," Dalglish said.

Newcastle surged back into the race for a top four place with a 2-0 win at struggling Bolton.

Alan Pardew's side had failed to win any of their previous six matches but they got back on track to move within four points of Chelsea thanks to second half goals from Hatem Ben Arfa and Demba Ba.