Russia Calls for 'Dialogue' between Israel and Iran 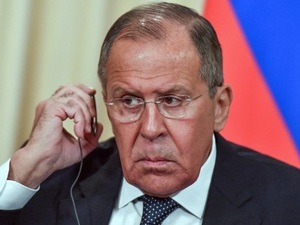 Russian Foreign Minister Sergei Lavrov Thursday called for dialogue between Israel and Iran following Israeli strikes on Iranian targets in Syria that marked a sharp escalation between the two enemies.

"This is a very disturbing trend. We proceed from the fact that all issues should be solved through dialogue," Lavrov said at a press conference.

He added that Russia had warned Israel to avoid "all actions that could be seen as provocative" the day before the strikes, when Israeli Prime Minister Benjamin Netanyahu was in Moscow for talks with Russian President Vladimir Putin.

On Wednesday the Russian leader, who has provided massive military and diplomatic backing for Bashar al-Assad's regime in Syria, called the situation in the Middle East "unfortunately very acute."

Netanyahu had told Putin that "it is the right of every state, certainly the right of Israel, to take the necessary steps in order to protect itself from (Iranian) aggression)", his office said in a statement Wednesday, referring to Iran's presence in Syria.

Earlier on Thursday Russia's deputy foreign minister Mikhail Bogdanov called for "restraint on all sides" and said Moscow was "concerned" at the escalation.

Israel's army said Thursday it had hit dozens of Iranian military targets around Syria in one of its largest military operations in recent years and its biggest such assault against Iranian targets.

Israel carried out the raids after it said around 20 rockets were fired from Syria at its forces in the occupied Golan Heights at around midnight.

It blamed the rocket fire on Iran's Al-Quds force, adding that Israel's anti-missile system intercepted four of the projectiles while the rest did not land in its territory.

The incident came after weeks of rising tensions and followed U.S. President Donald Trump's decision to withdraw from a key 2015 Iran nuclear deal on Tuesday, a move Israel had long advocated.