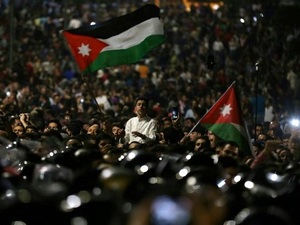 Official media say Jordan's embattled prime minister has submitted his resignation amid mounting anti-government protests over a planned tax increase and recent price hikes of fuel and other basic goods.

Websites Hala Akhbar and Al-Rai reported that Hani Mulki informed Jordan's King Abdullah II of his decision on Monday. Hala Akhbar is linked to Jordan's military and Al-Rai is a state-run daily.

It's unclear if Mulki's departure will suffice to defuse growing public anger, manifested in the past few days in the largest street protests in the kingdom in recent years.

Earlier, an official website said Jordan's embattled prime minister is heading to a meeting with King Abdullah II, in the wake of the largest anti-government protests in the kingdom since 2011.

Thousands have filled the streets of the kingdom in recent days to protest planned tax increases and have called for the resignation of Prime Minister Hani Mulki.

The Hala Akhbar site, linked to Jordan's military, says Mulki was on his way to the palace Monday.

The summoning of Mulki by the monarch has fueled speculation he might be asked to resign. It's unclear if his departure would suffice to defuse growing public anger over a series of austerity measures.

The king, who has final say on all policy issues, has frequently disbanded governments to manage crises of public confidence.