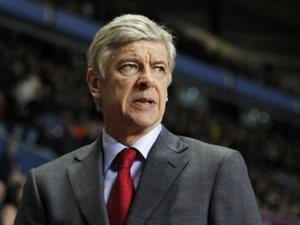 Arsene Wenger expects more twists at the top of the Premier League this season after blaming his players for dropping points in a 1-1 against Wolves.

Arsenal were left frustrated at the Emirates Stadium after Gervinho's opener was cancelled out by Steven Fletcher, with the visitors holding on despite Nenad Milijas' dismissal.

It meant Arsenal missed the opportunity to climb back into the Champions League places following Chelsea's draw against Fulham the previous day.

The result also left them 12 points off the lead.

"There are going to be a lot of twists and turns, but unfortunately we could not take advantage of that, which is the real frustrating thing," said the Frenchman.

"When you have the luck of the results and you play the following day, you can take advantage of it, that is where the worrying thing is because in the season you have to take your opportunities."

Arsenal looked set to record a straightforward win when Gervinho was played through and rounded goalkeeper Wayne Hennessey before finishing.

But Fletcher leveled with a header before the interval, diverting Stephen Hunt's deflected shot into the bottom corner of the net.

The hosts had a penalty appeal turned down by referee Stuart Attwell when Christophe Berra appeared to block Laurent Koscielny's cross with his arm.

Milijas was then dismissed in the 75th minute following a tackle on Mikel Arteta, but Wolves held on for a point after a polished performance from Hennessey.

The Welsh keeper's best saves came from Per Mertesacker's header, efforts from Robin van Persie and a last-minute block to deny Thomas Vermaelen.

"At the moment what we have to learn is that when we are 1-0 up in some departments we cannot be too comfortable," Wenger said.

"We were caught in a position where we can only blame ourselves. Apart from that their keeper had the game of his life, Wolves fought like mad and well done to them.

"I don't know how many shots we had on goal and how many they had, but it was the kind of game that if you play it 20 times you win 19 and you draw one."

Wenger felt his team should have won without the need of Attwell awarding a penalty, but he was frustrated at another spot-kick being turned down after being denied one against Manchester City earlier this month.

He added: "It looks like for us, to get a penalty we will have to fight very hard. I have seen the handball at Manchester City and it was definitely handball."

"It was the kind of day where maybe we were not relaxed enough, maybe we wanted it so much, that we were a bit too in the wanting zone and not enough in just the technical zone."

He said: "I will go and ask Stuart. I think that rarefied atmosphere out there is a difficult place to work in whether you are a player, coach, manager, referee or assistant.

"It's pretty pressurized and I think there was a lot of pressure on him to do it.

"He did what he saw. If he sees it again then it can't be. He's got his foot on the ground and makes contact with the ball. I don’t think he leaves the ground.

"Somebody said to me 'he's got his studs up'. Well, you generally do if you tackle with your foot sliding in."