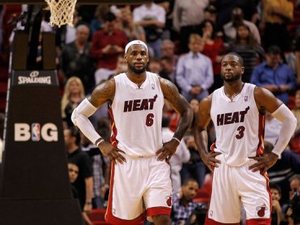 The star-studded Heat dominated most of the match, leading by as many as 20 points before the determined Celtics twice narrowed the deficit to three points in the closing minutes.

Cole, playing his second NBA contest, helped make the difference as he delivered 14 of his 20 points in the final period -- earning the reserve point guard chants of "MVP" from the Miami crowd.

Cole also took a charge from Boston's imposing Brandon Bass with 3:15 remaining. Sprawled on the court, Cole was clearly delighted as the foul was called on Bass.

Chris Bosh added 18 points for Miami, who opened the lockout-shortened season with a victory over the Dallas Mavericks on Christmas Day in a rematch of the NBA championship series won by the Mavericks last season.

Ray Allen scored 28 points for the Celtics, who were again without Paul Pierce.

Pierce bruised a heel in the team's first practice at training camp and has missed Boston's first two games -- both defeats.

Rajon Rondo finished with 22 points and 12 assists for Boston, and Keyon Dooling came off the bench and chipped in 13 points.

But the Celtics could not overcome the Heat's aggressive attack and red-hot 56 percent shooting from the field.