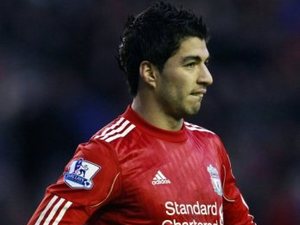 Liverpool striker Luis Suarez has accepted a charge of improper conduct for making an obscene gesture toward Fulham fans during a Premier League match and will serve an immediate one-match ban.

The club has also been fined 20,000 pounds ($31,000) and warned about its future conduct after its players harangued referee Kevin Friend over his decision to send off midfielder Jay Spearing during the same match on December 5.

Suarez, who is considering whether to appeal against an eight-match ban for racially abusing Manchester United defender Patrice Evra, was photographed walking from the pitch following Liverpool's 1-0 defeat to Fulham with his middle finger raised.

The Uruguayan will miss Friday's home match against Newcastle.