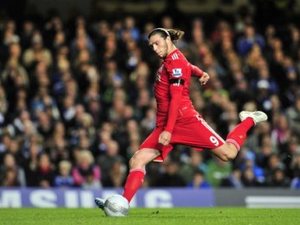 Carroll, 22, made a 20-minute substitute appearance in Liverpool's 3-0 victory over the Magpies in May.

But the England striker is sure to start against his old team, with Luis Suarez ruled out with a one-match suspension.

Carroll has split opinion since making a £35 million move to Anfield in January this year, having managed just four Premier League goals.

He was criticized once again after missing a host of chances in Liverpool's 1-1 draw with Blackburn on Monday.

Even England manager Fabio Capello has admitted to reservations about Carroll's lifestyle in the past, something that continues to fascinate the English media.

But Dalglish maintains Carroll is on the right track and has adapted well since his expensive move to Liverpool.

He said: "I don't think self-belief is a problem for Andy Carroll and I don't see why it should be.

"I don't think there's any evidence there to say he is short of self-belief and I don't see any evidence to see why he should be.

"For us he has come here and gone about his work very well. He is adjusting to life at a new club with new philosophies and a new way of playing.

"Football is the most important thing to him. That's what he enjoys most. He loves playing football, he loves scoring goals and loves being part and parcel of the team. That's the personality he is.

"He is adapting well to the change and we'll keep working with him because fortunately for Andy we've got much greater belief in him than a lot of people have that write about him."

Suarez, who is set to appeal against an eight-match ban he was given for allegedly racially abusing Manchester United's Patrice Evra, is absent after admitting a Football Association charge of improper conduct for a gesture made to Fulham fans after his team's 1-0 loss at Craven Cottage earlier in December.

Steven Gerrard, who came off the bench against Blackburn, is expected to continue his recuperation from an ankle problem as a substitute, while Jay Spearing is back from a ban.

Liverpool remain undefeated in the Premier League at Anfield but have won just three and drawn six of their home matches.

Dalglish is confident that his Liverpool team can bring an end to their recent frustrations.

He added: "We want to move on and everybody wants the reward for the fantastic play they have produced.

"We need to improve the 'goals for' column so we'll continue to pursue that goal and I'm sure next year they will be better for the experience they have had this year.

"I think we deserve to be higher up the table than we are but you've got to earn that right and not talk about it - but to be fair they have done a lot of talking on the pitch for us."

Alan Pardew's Newcastle trail the Reds by just one point ahead of Friday's fixture.

A key factor in Newcastle's impressive opening to the campaign has been the form of Ivory Coast international midfielder Cheik Tiote.

As well as Chelsea and Manchester United, Liverpool have been linked with a January move for Tiote, 25.

But the midfielder has given Newcastle a significant boost ahead of the trip to Anfield, by claiming he is happy where he is.

Tiote said: "People can say whatever they want to say about me, but I'm a professional footballer and I play for Newcastle.

"I'm not thinking of leaving in January - I'm very happy playing for this club.

"That's my job and I need to work hard for the team and the club. I have to focus on my job for Newcastle - that's what I have to do."