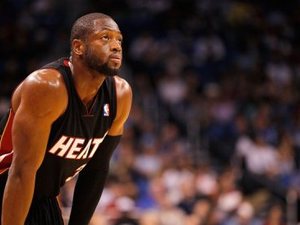 Dwyane Wade banked in the game-winning shot with 2.9 seconds remaining as the Miami Heat rallied to edge Charlotte 96-95 in a National Basketball Association game.

Playing their second game in as many nights, the star-studded Heat didn't display the speedy, aggressive attack that saw them post convincing victories over reigning champions Dallas on Sunday and Eastern Conference rivals Boston on Tuesday.

Charlotte leapt to an 11-0 lead and stretched the advantage to 60-45 at halftime.

Wade missed most of the third quarter with a bruised left foot, and he admitted he was surprised coach Erik Spoelstra tabbed him to take the decisive shot since he had scored just eight points while LeBron James poured in 35 on the night.

The Heat improved to 3-0 in the young, lockout-shortened season, and Spoelstra was pleased to see his players fight through adversity.

"It's good to see us show some resolve, some toughness," Spoelstra said.

James said the Heat made it more difficult than it needed to be.

"The first half wasn't Miami Heat basketball," he said.