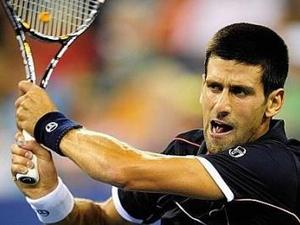 Novak Djokovic, Rafael Nadal and Roger Federer meet in a $250,000 three-day exhibition tournament in Abu Dhabi's winter sun from Thursday, eager to strike early blows ahead of the 2012 season.

In the new year, world number one Djokovic will defend three Grand Slam titles and Nadal will look to hang on to his Olympic title and French Open crown, while Federer, despite nearing his 31st birthday, is keen to extend his impressive late run in 2011.

Djokovic won three of the four Grand Slams and five Masters this year and built a 70-6 winning record.

His progress towards the end of the year was slowed by a series of back and shoulder injuries, but the Serb insists he is well rested as 2012 approaches.

"This year's success gives me a reason to believe that I can win again. Why not?" said Djokovic, who has been based in Abu Dhabi for the past two weeks.

"Of course it is going to be an incredibly difficult task to achieve, but you never know, nothing is really impossible."

Nadal lost his world number one ranking to Djokovic in 2011 and cut a world-weary figure as the year came to an end, having played 84 matches -- more than any of his rivals.

But the 25-year-old, whose French Open triumph was his 10th major and sixth at Roland Garros, believes leading Spain to a fifth Davis Cup has helped reignite his hopes for 2012.

He is also determined to adopt a new approach to his trade.

"I tell myself: 'If I do a bit more, I will be nearly back to winning things again.' That is the motivation. Recovering the extra will that makes you give a bit more of yourself," he said.

"I have to get back to my cruising altitude, which should be higher. From Indian Wells to Wimbledon and the Olympic Games is where I have to recover my best level."

Federer, meanwhile, defied those who believe that having celebrated his 30th birthday in 2011, his best was behind him.

The Swiss won his first title in Doha in January before picking up three more in the home straight in Basel, Paris and a sixth World Tour finals trophy.

"My passion for competition and my love for tennis has a lot to do with it," Federer told the United Arab Emirates' The National newspaper.

"I have always said that the minute you decide or think that you cannot improve is the time that you should stop playing.

"The good news for me is that I feel like I still have things to learn and parts of my game to improve, so I am excited for the future."