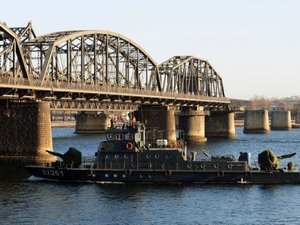 Truck drivers and traders in China's border city of Dandong said Thursday trade with North Korea had slowed to a trickle following the death of leader Kim Jong-Il earlier this month.

Kim died on December 17 from a heart attack at the age of 69, and North Korea has imposed an official mourning period that culminated Thursday with a massive memorial service.

China shares a 1,415-kilometre (880-mile) border with North Korea and has sought to boost trade in a bid to encourage its hardline neighbor to embark on market-oriented economic reforms.

As such, many in Dandong, a city of 2.5 million people in northeastern China that borders North Korea, trade with the impoverished state, which depends heavily on its wealthier neighbor for oil, food and consumer goods.

But many of Dandong's traders and truck drivers say they have had little to do since Kim's death was announced on December 19.

Han Lixin, an entrepreneur who sells agricultural machinery to North Korea, said business with the country "had basically stopped" since Kim's death.

"There has been no business or trading," he told Agence France Presse, adding his trade with North Korea accounted for 50 percent of his overall business.

At a loading zone in the city, an employee surnamed Tang said the number of trucks crossing the border had plunged by half since December 19.

"At first I was a little worried they would stop us sending goods," Tang told AFP, as more than a dozen trucks lay idle in the loading zone, where boxes of cigarettes, instant noodles and agricultural machinery are normally piled on to lorries bound for North Korean markets.

Both Tang and Han expressed confidence that business would return to normal once the mourning period had ended.

But one businessman surnamed Yu, who sells trucks to North Korea, said he did not dare predict the future where business with the isolated state was concerned.

"It is a very special country, it is not like other countries," he said, as North Korea formally declared Kim's untested young son Jong-Un the new supreme leader.

Analysts, however, said the business lull was expected to be temporary.

Trade between the two countries has surged over the past year, rising an annual 87 percent in the first seven months of 2011 to $3.1 billion, with a significant portion being transported by road or rail through Dandong.

That compares with $3.5 billion for the whole of 2010 and $2.7 billion in 2009, government data shows, but analysts say the total could be much higher if unofficial bartering in consumer goods and raw materials is included.

Beijing, anxious to avoid a power struggle in Pyongyang that could trigger a flood of refugees across the country's border, has thrown its support behind Kim's successor Jong-Un.

Leonid Petrov, a specialist in Korean studies at the Australian National University in Canberra, said that trade between the two countries was a "lifeline" that neither side could afford to sever.

He said trade had been booming in recent years and "will continue and will grow".

One Chinese industry given a significant -- albeit temporary -- boost by Kim's death is the flower sector, which has seen demand for white and yellow chrysanthemums -- the traditional flower of mourning -- soar across the border.