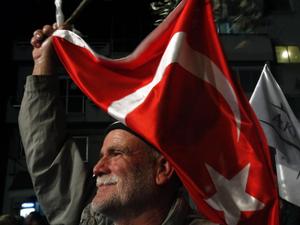 Turkey on Thursday slammed a new law adopted by Israel's parliament defining the country as the nation state of the Jewish people, saying the legislation "trampled" on universal law and the rights of Israeli Arabs.

The legislation, adopted after a tumultuous Knesset session, makes Hebrew the country's national language and defines the establishment of Jewish communities as being in the national interest.

This law "tramples on the principles of universal law and disregards the rights of the Palestinian citizens of Israel," the Turkish foreign ministry said in a statement.

"The fact that the law presents the right to auto-determination as a right that only applies to Jews is the product of a mentality that is outdated and discriminatory," it said.

Arab citizens account for some 17.5 percent of Israel's more than eight million population. They have long complained of discrimination.

The Turkish foreign ministry called for the "necessary response" from the international community to the law, which it said was aimed at eliminating the vision of a two-state solution.

He said it was an effort to "legally erase" the Palestinian people "from their homelands".

The issue is the latest source of tensions between Israel and Turkey, one of the Jewish state's few key Muslim partners.

Ankara ordered out Israel's ambassador in May over the killing of protestors along the border with the Gaza Strip.

The strains have threatened a 2016 deal on normalising ties after the crisis sparked by the May 2010 deadly storming of a Turkish ship by Israeli commandos.

Erdogan regards himself as a champion of the Palestinians and has twice held summits in the last months of Muslim states to denounce the recognition by the United States of Jerusalem as Israel's capital.

But analysts note that behind the rhetoric economic ties remain strong, with trade robust and both sides interested in the export of Israeli energy resources to Turkey.

All the regimes in the region are placing bets on how long this Israel-ish thing can last. Associated bets are, then, being placed on Arab despotism, and here is the case of Turkish despotism.
As Bernard Schwartz said of the English constitution, "democracy is always bubbling up from below". Why should any other place be any different?