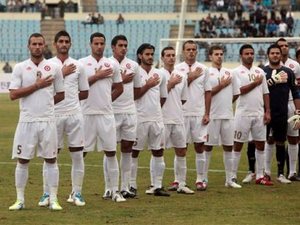 The roars of "Minshan Allah, Libnan yallah" — "For God's Sake, Lebanon Come On" — filled the 60,000-seat stadium and grew louder as the team closed in on a historic 2-1 win over their favored Asian opponents.

After Lebanon completed the victory that put it on the verge of reaching the next qualifying round for the 2014 World Cup, tens of thousands of fans poured into the street waving the country's red and white flags with a green cedar in the middle.

Traffic came to a halt and it seemed for a moment as if the troubles that have plagued this country for decades had disappeared.

"Sports can do what religion and politics can't, gather the Lebanese people around a common thing," said Lebanese supporter Serge Mghames, who was in the crowd for the Nov. 15 match. "The national team changed the point of view to many football fans, and it united them for one goal, to participate in World Cup 2014.

"This was a very good step to help people to leave their political and religious views behind and watch their team without reverting to riots or gang wars."

Poised along the Middle East's most turbulent fault lines, Lebanon long has been the site of grinding conflicts and violence.

The country's population of 4 million is divided between 18 sects, including Sunni and Shiite Muslims, Christians and Druze, and every community is sensitive to anything that could tip the balance of power in a country with a grim history of sectarian strife.

Much of the trouble between the groups has spilled over into football. The Lebanese government banned fans from attending domestic league matches following former Premier Rafik Harriri's assassination in 2005, imposing the measure after local clubs aligned with different sectarian groups turned violent.

The ban was rescinded in October, but it devastated football in the country, with the domestic league all but collapsing and the national team drained of potential talent. The national team fell in the FIFA world rankings from 125 to as low as 178 before its recent resurgence.

"Without the fans, football is dead," said the general secretary of the Lebanese football federation Rahif Alameh, "Football had just (become an extension) of politics. Everything in Lebanon is politicized, the air we breathe is politicized."

But then the national team started winning.

Lebanon has risen to 111th in the rankings, with the 2-1 win over South Korea stretching its undefeated run to four games dating to a victory over the United Arab Emirates in September.

"The (rankings) are very generous and it puts us under more pressure to maintain it and improve it," said the team's German coach Theo Bucker, who took over in August after a stint with Zamalek in Egypt. "We will be trying to climb up further."

Bucker deserves much of the credit for the team's surprising rise. He managed to talk the country's two best players, Rida Antar and Youssef Mohammed, out of international retirement and set about changing the mentality of Lebanese football.

"When I was starting, trying to teach (professionalism), it was necessary to do more than just talk," Bucker said, "I told the players how to get into the complete living process of being a professional player. Then I looked in their eyes and they were blank. They didn't know what I was talking about. This was something no one had ever told them."

Bucker said he felt the mentality of the players began to change for the better during a training camp in Qatar just before the South Korea match.

"We played two friendly matches against Iraq and Thailand and for me that was where the breakthrough came because we played well and got good results," he said. "It was the first time the players thought, 'Ah, this what Theo was talking about.'"

Lebanon captain Antar has been at the heart of the team's resurgence and he believes that Bucker's confidence and professionalism have been the difference for Lebanon.

"He knows the mentality of the Lebanese players and he is always trying to motivate the players to show them that they can also play and it is showing on the pitch," Antar said. "In the dressing room and on the training ground, he is excellent. Two or three days before the game, he is always going around and telling the players to be professional."

The team's success has revived the country's interest in the sport and now fans are thinking the unthinkable. Not only could Lebanon reach the fourth round of qualifying for the first time, but maybe it could even reach the 2014 World Cup.

"If Lebanon qualifies for the World Cup, it will raise the status of football in Lebanon. It will improve our image," said Abbas Atweh, who scored the winning goal against South Korea, "Everyone is working toward the Lebanese team qualifying. This is a very big opportunity for us and hopefully it will happen. It will be very important for our country."

Lebanon only requires a point from its final group match against a winless UAE squad to advance. If it loses, Lebanon still would go through unless Kuwait manages to upset South Korea.

"There are no guarantees in football," Buckner told FIFA.com. "We can only guarantee that we will go about our job in a professional manner. We are in good form, but don't write off the Emirates."

Inshallah Lebanon will be the winner :)

when is the match ? with emirates?

February 29th at the emirates