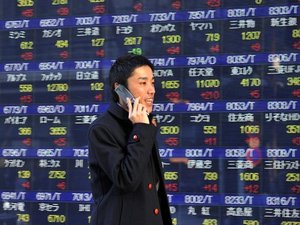 On the day, the benchmark index closed up 56.46 points or 0.67 percent from the previous day.

"There were a few times when the Nikkei index recovered to 9,000-10,000 after the disaster, but it didn't hold at those levels too long," Daisuke Uno, chief market strategist of Sumitomo Mitsui Banking Corp., told Agence France Presse.

"The Tokyo stock market has had a weak year, falling about 2,000 points since the beginning of the year," he said.

Tokyo shares, which had ended above the 10,400 level on the day before the earthquake disaster, plummeted to 8,605.15 on March 15, as Japan was gripped by the worst nuclear disaster the world has seen since Chernobyl.

Investors are not optimistic about the coming year, with the Eurozone sovereign debt crisis expected to continue dragging on the global economy.

"The market's focus, whether willing or not, will be on Europe at the beginning of the New Year, as rating companies are expected to announce results of their reviews on Eurozone nations," he added.

Japan's industrial sector struggled in 2011 even after getting back on its feet from the tsunami, when flooding in Thailand submerged factories and disrupted supply chains.

But Sumitomo's Uno also said: "The main factor really affecting the market has been the European debt crisis while the US economic trend has also changed and started slowing.

"Next year, I think the market focus will shift from Europe to the United States and China.

"The US economy faces fiscal challenges while emerging economies will face a risk of bubble bursting and markets shrinking," Uno said, forecasting the Nikkei to trade in a range between 7,500 and 9,000.

Japan's export-reliant economy has also suffered from a soaring yen, which hit a fresh post-war high of 75.32 against the dollar in October. A high yen makes Japanese products more expensive overseas and erodes repatriated profits for manufacturers.

The euro also is losing ground against the Japanese unit, renewing new 10-year-lows.

Uno said the Japanese currency was likely to remain a safe haven for global investors.