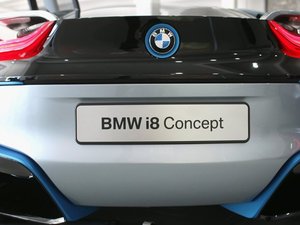 In a first, two German manufacturers -- Mercedes-Benz and BMW -- are dueling for the honor of being the top luxury brand sold in the United States.

With the champion of the past 11 years, Toyota's Lexus, hobbled by the fallout from Japan's March 11 earthquake-tsunami-nuclear meltdown disaster, the two Teutonic giants are going at it head-on to snatch the crown, a highly visible symbol of automotive supremacy.

The 2011 race is closing in a genuine side-by-side, wheel-to-wheel sprint to the finish.

Sales of BMWs rose only seven percent, leaving it clinging to a slender lead of only 1,500 units for the year.

The latest figures from the companies show BMW has sold 221,073 vehicles so far this year, while Mercedes has sold 219,491.

The bragging rights the crown brings can help in future sales.

"The marketing guys love it. You can use it in advertising. So that makes it worth pursing," said Joe Phillippi, an independent industry analyst.

Publicly, both are playing down their battle.

However, Cannon also noted Mercedes has completely overhauled its product line in the US this year.

And the latest models, such as the new C-Class Coupe and M-Class, are now available at dealers, bolstering chances for strong December sales.

Ian Robertson, BMW board member for sales and marketing, said the company is pleased with its position.

"This was our best ever November sales month," he said recently.

In fact, both have ramped up incentive spending as the sales showdown intensified.

Mercedes has increased its incentives by 57 percent this year, according to estimates from TrueCar.com.

In November, BMW began offering a finance credit of up to $2,500 on some of its most popular models, including 3 Series and 5 Series sedans, along with X5 crossover vehicles.

Lexus, like many Japanese carmakers, was hurt when Japan's massive earthquake forced parts makers to shut down for weeks, disrupting the supply chain of the Japanese auto industry.

But Phillippi said the country's triple disaster wasn't the only reason for the Lexus decline.

Both Mercedes and BMW have invested heavily in new vehicles designed to fit into more market niches, he said. Lexus has not kept pace. And the rise of Audi also has cut into Lexus's market share, he said.

"I anticipate Lexus will push its iconic 'December to Remember' message hard... in the hopes of closing the gap with Mercedes-Benz and BMW, though there is no chance Lexus will keep its leader status this year," she said.

Analysts predicted Mercedes will come out on top.

"Our December sales forecast projects that Mercedes will squeak out a victory by about a thousand units. Still, that number is unofficial, and at least for the moment, the race remains too close to call," Edmunds.com analyst Aaron Lewis said.

"In any case, it's definitely very exciting that the race between these two is coming right down to the wire."