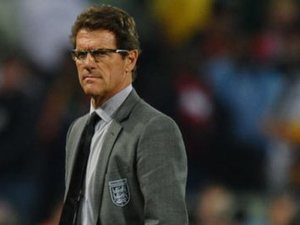 Capello is concerned rich top sides are creaming off youngsters for their own academies after their home clubs have made the initial investment in training them.

"More players are being bought when they are very young by richer teams because if a family receives an offer for their son that will bring a lot of financial support, they will be willing to move abroad and change their living habits," said Capello.

"It's a fine line and a rule needs to be put in place because clubs are scouting all over the world and stealing players from each other," Capello added.

"I think UEFA should pass new rules to allow clubs to reap the reward from the seed that has been sowed instead of seeing their talents leave when the player receives a major offer," he said.

"I have spoken to Platini, and I am sure that in the future clubs will be forbidden to steal players away when they are still very young," Capello, attending the Dubai International Sports conference, was quoted as saying by newspaper thenational.ae.

Capello noted that the issue is not just one which exists at club level but also international level.

When England crashed out of the World Cup to Germany last year the German side contained a dozen players who could have represented a different country, including star man Mesut Ozil - of Turkish origin - and strikers Miroslav Klose and Lukas Podolski, who could have played for Poland.

Neither Turkey nor Poland, shorn of such potential talents, qualified for the World Cup.