Terry Vows to Stay with Chelsea 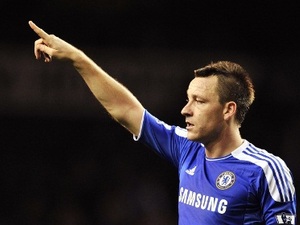 Chelsea and England captain John Terry has insisted he wants to see out the whole of his career with the London club ahead of their Premier League clash at home to Aston Villa on Saturday.

The 31-year-old central defender has been under pressure both on and off the field this season, having taken some of the blame for Chelsea's profligacy at the back, which was partly due to new manager Andre Villas-Boas's tactics.

And last week he was charged by British prosecutors and must now appear in court to answer charges he racially abused QPR defender Anton Ferdinand following an alleged incident in Chelsea's loss at Loftus Road in October.

But Terry has no interest in leaving Stamford Bridge, where he has been since he was a trainee, and is ready to take on any challengers to his position should Portuguese boss Villas-Boas bring in new defenders during the January transfer window, with Bolton's Gary Cahill linked with a move to Chelsea.

"I have spent my whole career here and I been fortunate enough to start at a very young age and continue," Terry said.

"I am really proud to be at one club -- and there is no way I could see myself in a different shirt anyway. The rapport with the fans you get is incredible.

"I have seen managers come in -- big managers -- and I have been able to keep improving.

"That is because one, I have wanted to and two, I see this as my club and it always will be. When I finish playing I want to bring my kids back here and watch games."

Terry added the days of 'one-club' players such as himself and Liverpool midfielder Steven Gerrard were all but over.

"You don't see it in this day and age," said Terry. "There are a few at Manchester United and there is Steven Gerrard at Liverpool, but we are a rare breed.

You could count the people that have spent their whole career at one club on one hand."

Villas-Boas, who effectively conceded his side's hopes of winning the title were over following a 1-1 west London derby draw with Fulham last time out -- a result that left Chelsea 11 points behind the top two of Manchester City and Manchester United -- faces a defensive headache ahead of the Villa match.

Jose Bosingwa is a major doubt after suffering a hamstring strain against Fulham and he joins Branislav Ivanovic and defensive midfielder Jon Obi Mikel on the sidelines.

Bosingwa, who played in central defense following Ivanovic's injury against Tottenham on December 22, will have a fitness test ahead of the game.

Fernando Torres is likely to be back on the bench for Chelsea after failing to make much of an impression against Fulham.

Meanwhile Villa defender Carlos Cuellar believes Spanish compatriot Juan Mata, a pre-season arrival who, unlike Torres, has made an almost instant impact at Chelsea, is already one of the best players in the Premier League.

"I am very surprised Juan has adapted so quickly," Cuellar said. "He is already one of the best players in the Premier League.

Villa, five points above the relegation zone, head to London having failed to beat any of the top six so far this term, but Cuellar has warned Chelsea to write them off at their peril.

"We can win, definitely. If we play like we did against Arsenal (in the 2-1 defeat last Wednesday), not too many teams will beat us this season."

Villa hope Darren Bent (groin and thigh) will be fit, while Alan Hutton is back from suspension. Emile Heskey (Achilles) is out but could be fit for Monday's visit of Swansea.