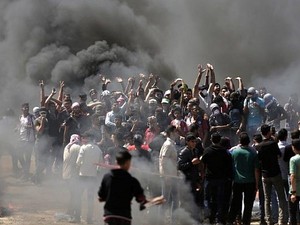 Calm returned to Gaza and neighbouring areas of Israel Friday after a deadly flare-up between Palestinian militants and the Israeli military, but fresh protests could test the embryonic truce.

Palestinian political sources said agreement had been reached to end all rocket fire into Israel and air strikes on Gaza from around midnight (2100 GMT) on Thursday.

There was no Israeli confirmation but there were no fresh strikes overnight.

Thursday had seen extensive Israeli raids in retaliation for the launching of more than 180 rockets and mortar rounds by Gaza's Islamist rulers Hamas and its allies on Wednesday night.

Three Palestinians were killed in the Israeli strikes, including a mother and her year-old daughter, while seven Israelis were wounded by Palestinian rocket fire as hundreds took refuge in bomb shelters.

It was one of the most serious flareups since the 2014 Gaza war and followed months of escalating tensions.

Late on Thursday, an Israeli air raid flattened a five-storey building which hosted a cultural centre in Gaza City but which the army said was used by Hamas security forces.

The Israeli security cabinet and the Hamas leadership convened separately late on Thursday, with the truce offer brokered by Egypt and the United Nations on the table.

Neither Israel nor Hamas officially confirmed any truce had gone into effect, although that has also been the case with previous informal arrangements.

It would be the third such truce in a month.

Reserve general Doron Almog, former head of Israel's southern command which deals with Gaza, told army radio on Friday morning that the next 24 hours would be crucial.

"We are closer to an arrangement than we have been in the past because Hamas's interest in a deal is greater than its wish for escalation," he said.

- Lone call for war -For Israel, the response to the Hamas rockets is politically problematic for Prime Minister Benjamin Netanyahu.

A Friday opinion poll published by Hebrew-language newspaper Maariv found that 64 percent of respondents, both Jews and Arabs, were dissatisfied with Netanyahu's policy towards Hamas, with only 29 percent supportive.

The survey polled 512 people and had a margin of error of 4.3 percentage points.

Maariv commentator Ben Caspit wrote that during the security cabinet meeting on Thursday Defence Minister Avigdor Lieberman was a lone voice in support of a new war in Gaza.

"He was the only one who demanded to launch a large-scale operation in the Gaza Strip. Netanyahu was opposed. The (Israeli army) also didn't recommend it," he said.

Hamas and Israel have fought three wars since 2008.

Palestinian protesters were expected to gather along the Israeli border on Friday evening, as they have every week since late March.

"Despite the aggression on the Gaza Strip, our Palestinian people will continue our march of return and breaking the blockade until it achieves its goals," said Hamas spokesman Hassem Qassem.

The protests are calling for an end to the decade-long Israeli blockade of Gaza and the return of Palestinian refugees to their ancestral homes inside Israel, which they fled or were expelled from during the war surrounding Israel's creation in 1948.

Israel says its blockade is necessary to isolate Hamas although critics say it amounts to collective punishment of two million people.

It says any significant return of refugees would mean the end of it as a Jewish state.

At least 165 Palestinians have been killed since protests began on March 30.

Most were killed by Israeli fire during the protests but others died in air strikes.

One Israeli soldier was shot dead by a Palestinian sniper.