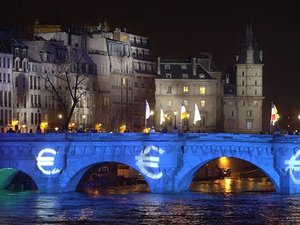 Just three years ago, the euro was being praised as the can-do currency that had delivered unprecedented prosperity in Europe.

Now, it's widely derided as a hugely flawed experiment in the wake of a debt crisis that's threatening its very existence — an uncomfortable backdrop as the currency's notes and coins hit their first decade in circulation on Jan. 1.

The question is: Will it get to its 11th birthday, let alone 20th? In the euro's tumultuous short history, it has already been heralded as the ultimate mark of a peaceful, united Europe; scoffed at as a giant act of hubris by a distant political elite; and credited with giving Europe a more influential voice in the world.

These days, as it faces its biggest crisis yet, the euro is a daily reminder to more than 330 million people of the dismal state of the economy in the 17-nation eurozone. Many countries seem headed back into recession, and policymakers are grappling with a spiraling debt crisis.

While few Europeans are prepared to scrap the euro — in part because they fear a chaotic collapse more than the current muddle — some are nostalgic for the money they counted on before it arrived.

Parisians waiting to exchange their old francs outside a branch of the Banque de France before a Feb. 17 deadline harked back to the "rosy" days.

"Life was better before," said Mamia Zenak, a 52-year-old doctor. "It (the euro) is a misery for everyone."

But it was not always so.

In 2009, fanfare accompanied the 10th anniversary of the euro's "launch," when it began floating on international exchanges and banks and governments started using it in their accounting. It was widely credited with cushioning the countries that use it from the banking crisis sparked by the collapse of U.S. investment bank Lehman Brothers in 2008, and for preventing proud euro member Ireland from descending into the economic chaos that befell non-euro Iceland.

"When the euro was launched there were plenty of people who thought it would crash and burn," the BBC wrote in a story on its website at the time. "Ten years on, its role as a global currency is secure."

It doesn't look so secure now. Events took a dark turn in 2010, when the debt-fueled boom years finally caught up with Greece and the eurozone realized it didn't have the tools to deal with its economic implosion.

Eventually Greece's euro partners and the International Monetary Fund found the money to bail the country out but it wasn't long before Ireland had to be rescued too after its property and banking sectors collapsed. In 2011, Portugal's failure to deal with its chronically sclerotic economy meant it joined the bailout club too.

Now as 2012 dawns, the euro's role as even a regional currency is uncertain as the crisis has spread to much-bigger Italy, with many skeptical about its ability to survive, at least in its present form.

Today's pessimism recalls the early days, when consumers worried that the currency would do them in financially, as shopkeepers took advantage of the changeover to hike prices. Maria Esteban, a catering manager in Madrid, remembered the price of a beer jumping from 150 pesetas to €1.50 — an increase of 66 percent.

"People barely knew what they were paying," said the 50-year-old.

Prices that had been set for their ease — 10 francs, which was one coin, for a cone of roasted chestnuts in Paris, for instance — saw some of the most egregious markups. Overnight, those chestnuts rose by a third — to €2, also a single coin.

A European Central Bank analysis found that while the perception that prices skyrocketed after the euro is generally exaggerated, 0.3 percentage point of 2002's 2.3 percent inflation was due to the introduction of the new notes and coins.

But, after that first uneasy year, an EU survey found that just over half of respondents thought the euro was "overall advantageous," while nearly a third thought the opposite. By 2007, at the height of an economic boom and with calls for the euro to become the world's reserve currency, 72 percent thought the currency was a "good thing" for Europe.

In the EU's latest survey, that figure has fallen to around two-thirds of respondents, and the economic downturn has renewed complaints about the squeeze exerted by the single currency.

While public affection for the euro vacillates frequently, Europeans have remained convinced of one thing: Few believe the currency has achieved one of its more lofty goals, forging a common European identity from Dublin to Tallinn.

The European Commission most recently asked citizens last year if the euro had made them feel more European. More than three-quarters said it had "no effect." That number has remained fairly intractable over the years; it was 80 percent in 2002.

Dutchman Patrick Plomp, who collects and trades rare bank notes, said the bills' design is partially responsible for their failure to instill a connection to Europe.

Whereas his country's guilders carried pictures of the sunflower, Austrian schillings depicted a Lipizzaner stallion and Greece's drachma bore Apollo's head, the drawings on euros are merely examples of different types of European architecture: They don't represent real monuments.

"If you look at a euro, you'll see that it's made with buildings that don't exist, bridges to nowhere," said Plomp, 44. "The effect that this has is that people feel alienated from the money. It's something that comes from far away."

Taina Kovamaki, a 40-year-old nurse, added that a feeling of alienation from the note leads to worries about the currency in general.

"After all the Finnish markka was Finnish — it was our own," Kovamaki said as she lined up at the Bank of Finland counter in Helsinki, where the markka can be changed until Feb. 29. "The financial crisis scares me. I'm just not sure those people in Brussels know what they're doing."

But as with all things euro, how people feel about it depends largely on what they had before.

While many deride their generic look, stationery store owner Yiannakis Ioannides compares the notes to the flimsiness of the old Cypriot pound.

"It's better quality than the pound, which wasn't as good," the 52-year-old said.

The view from outside the currency union has also been just as fickle. Once seen as a sign that eastern European countries had "made it," joining the euro is now a far more sensitive subject. Poland, for one, is carefully measuring its words, calling for reforms before it joins.

Pauline Frommer, the managing editor of the Frommer's travel guides, recounts the glee of the currency's early days, when an Italian shopping spree could be had on the cheap by Americans because of the favorable exchange rate and the eventual dismay as the rate turned around in recent years.

Now, the euro has moved into a new phase, she said.

"The euro has come to symbolize something that may not have been fully thought through and may come back to bite us," said Frommer. "I think we're all very worried about the future of the euro, that maybe its 10th anniversary will be its last."