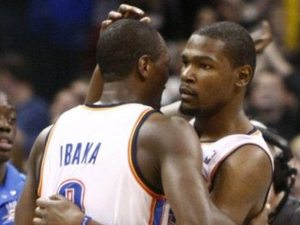 Kevin Durant's buzzer-beating three-pointer gave Oklahoma City a 104-102 NBA victory over Dallas on Thursday that left the reigning champion Mavericks without a win in three games this season.

Durant finished with 30 points, 11 rebounds and six assists. Russell Westbrook and Serge Ibaka contributed 16 points apiece as the Thunder overcame 26 turnovers to improve to 4-0 in the lockout-shortened season that began on Sunday.

Dallas, who defeated the Thunder in last season's Western Conference finals, fell to 0-3.

"We're making some strides, we forced a lot of turnovers," Mavericks coach Rick Carlisle said. "But making progress and being the team you need to be are two different things."

Dirk Nowitzki, the Most Valuable Player of the NBA finals as he led the Mavericks past Miami in the championship series in June, led Dallas with 29 points and 10 rebounds.

At times the Mavericks displayed the fluid offence that took them to their first league crown.

They erased a five-point deficit in the final minute, Nowitzki feeding Vince Carter for a three-pointer that gave Dallas a 102-101 lead with 1.4 seconds to play.

NBA scoring champion Durant had given Carter room at the top of the arc to make the shot, so he was especially pleased to have a chance to make up for that error.

After a timeout, Oklahoma City inbounded to Durant, who drained the winning shot.

"Kevin left Vince Carter so it was sort of redemption for him," Thunder coach Scott Brooks said. "That was a big play. Kevin is a play-maker and a shot-maker. He's mentally as tough as they come."

Brooks was unhappy with his team's 26 turnovers, but pleased with their effort.

"Our guys played as hard as we can play," he said. "Our tank is empty."